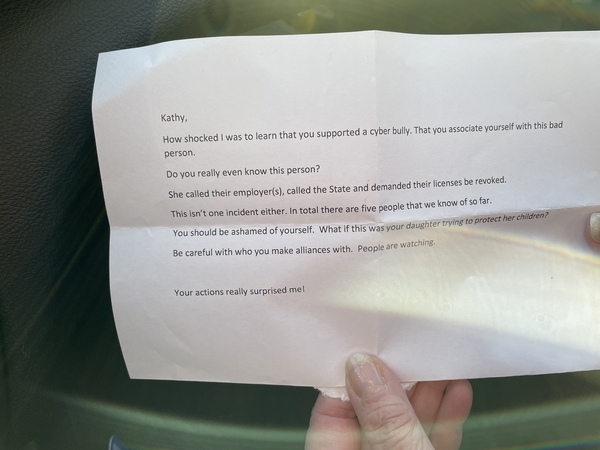 
A local resident has filed a police report after receiving an anonymous letter she felt was an attempt to intimidate her from speaking out against anti-mask efforts.

Kathy Carney of Green Oak Township said that after she donated money to a legal fund created for Kasey Helton, an unsigned note was mailed to her with what she thought was a threatening tone.

Helton recently made headlines after she posted videos to social media of anti-mask activists who used their status as nurses to oppose a proposed mask mandate in the district. One of the nurses, Holly Austin, ended up filing a complaint with the Livingston County Sheriff’s Office, which then forwarded it to the county prosecutor’s office requesting that charges be filed against Helton under a state cyberstalking law. While no decision has been made, Livingston County Prosecutor David Reader indicated that the report had been sent back to the sheriff’s office for further investigation.

Carney said the letter accused her of associating with a “cyber bully” and bad person”, referring to Helton, adding that she should be “ashamed” of herself. The letter concluded by saying; “Be careful with who you make alliances with. People are watching.” Carney said the fact that someone took the time to send a letter, but then not support their point of view with a signature, really says everything. "Who are these people?," asked Carney. "If they have true beliefs about not masking and about not getting shots, why are they afraid to sign it?"

Carney says she decided to make the letter public for two reasons. The first was not to allow someone she considers a bully to silence her as that is “exactly how bullies survive. They just get bolder and louder.” The second was to “showcase strategies used by the bullies to try and silence and intimidate those that think differently.”

She says anyone that truly knows her, would know that such a tactic would not work as she and her husband Joe, the former Chair of the Livingston County Democratic Party, are not ashamed of their beliefs.

“We are proud that we support scientific facts,” said Carney. “We will not be threatened by someone who doesn’t have the fortitude to sign their own letter.”