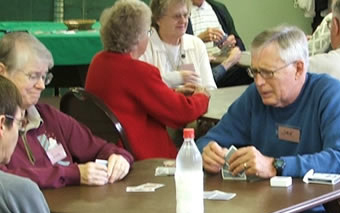 
One in four Livingston County seniors say they would like more social contact with friends, neighbors and relatives.

That’s according to a recent survey conducted for the Area Agency on Aging 1-B (AAA 1-B). Jim McGuire is director of research for the organization and says that in addition to 25% of area seniors feeling isolated, one in 13 of Livingston County’s 50,000 seniors have no friends of family nearby whom they can ask for help. McGuire says the survey’s findings are significant as senior social isolation is a national problem that is often associated with higher risk of elderly suicide, elder abuse and financial exploitation. The AAA 1-B says that loneliness has also been a found to be a contributing factor in fatal conditions such as heart disease and poses health risks that are comparable to obesity and smoking 15 cigarettes a day.

The agency recommends addressing senior social isolation by investing more resources in social, wellness and volunteer programming. But McGuire says Livingston County, which does not have a dedicated senior millage, is not adequately equipped to deal with the issue. "We did a comparison of Livingston County senior services to Monroe County, which has a senior millage, and it's a world of difference the amount of services provided to seniors in Monroe than in Livingston. In Livingston I think we only have two of our senior centers that have full-time directors. In Monroe, all of the senior centers have got full-time directors and they have much more robust programming, more attractive facilities that draw people in than we have in Livingston County. So we're seeing differences like that."

The idea of a senior millage was brought to the Board of Commissioners last year, at which time then-Chairman Don Parker said using Monroe County was not necessarily an “apples to apples comparison” as Livingston County has a greater growth rate and a Moody’s AAA Bond rating that Monroe County doesn’t have. He also noted that more local seniors own their homes while on a fixed income and a millage could disproportionately impact them. But the AAA 1-B notes a lack of senior services also has a financial impact. An AARP study found that social isolation adds almost $7 billion per year to the annual cost of Medicare, primarily due to longer hospital stays.

McGuire notes that while the Livingston County Board of Commissioners did recently commit funding for a new Meals on Wheels facility, more needs to be done. He adds that 70 of Michigan's 83 counties already have such a millage. Additional results from the survey are available below.