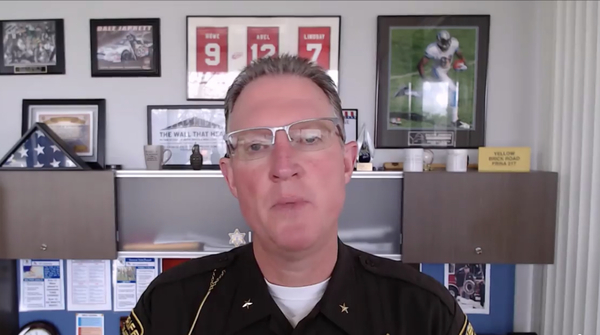 
Livingston County Sheriff Mike Murphy is explaining his recent decision to not enforce the Governor’s Executive Order, although state officials say it undermines the rule of law and jeopardizes public health.

Sheriff Murphy has taken to social media to share his side of the story with those who are frustrated that his Office isn’t stopping the owner of a Genoa Township mixed martial arts studio from opening and willfully ignoring the governor’s orders to close all gym and fitness centers. Murphy said he’s seeing points of discontent in emails. He hopes that even if people don’t agree with him, they might at least understand why he’s doing it.

To those who believe the County Board of Commissioners should tell him he must enforce the orders, Murphy points out that he is an elected official and works with Board but not for the Board.

He secondly addressed those who believe his department should not be picking and choosing which laws to enforce. Murphy said they already do this every day, calling it “discretion.” He used the example of pulling someone over for going 60 in a 55. He said with a reason for speeding that makes sense, and a good driving record, he may use discretion not to give a ticket. Murphy said when you use the argument or logic that all laws must be enforced, that driver should be ticketed and that they should be writing tickets for “everything all the time.” The sheriff reiterated that of course they do pick and choose what laws we enforce, and that he is using discretion to not enforce the governor’s orders.

The third point of contention Murphy said he is getting is that this is politically motivated. He claimed it is not, and that he would be making the same decision if it was Republican Governor Rick Snyder in office.

Murphy said when the orders started coming down, investigations were supposed to be done by the Attorney General’s office, but that only lasted a “hot second” before claims of being overwhelmed pushed it to local law enforcement. The Sheriff said prosecutors and civil attorneys, locally and elsewhere, don’t believe these laws are enforceable anyway, and could likely result in lawsuits coming back at his Office. He said it makes no sense to put his men and women in a position that is a “no-win.”

Violations of the order are a 90 day misdemeanor, which Sheriff Murphy says is, in the criminal world, the lowest on the totem pole you can be and be considered a criminal. When the courts open up again fully, he says they aren’t going to jam up their docket with enforcing misdemeanors. Murphy said it will be like when marijuana was legalized and everything in the court system was subsequently dismissed.

Murphy said 78 orders have come out so far and that some have been rescinded or replaced, and some have pages of FAQs with points and items that aren’t in the orders. It only adds to the confusion when the governor mentions something that isn’t allowed at her press conferences, but then it’s not included in the order. Murphy used boat motors, as an example.

The Sheriff said the naysayers act like he’s the law enforcement arm out there, but that’s not true. He said if the AG’s office or State Health Department want to do the investigation and cite people, then they can go for it. But Murphy said he has an idea they are hesitant to do it, because they, too, see the quagmire out there.

Murphy also questioned the legality of the last round of orders extending Gov. Whitmer’s powers without approval of legislators.

Murphy said he hopes people understand why the decision was made. He said he is trying to make the best decision he can for the men and women of his Office and the county as a whole. He encouraged people to be safe, use common sense, practice good personal hygiene, use social distancing, masks, gloves, and the things that are recommended. Murphy said him deciding whether or not to enforce an Executive Order isn’t going to do anything to keep people safe.

In a response to Murphy’s video, Michigan Attorney General’s Office Press Secretary Ryan Jarvi offered this statement in an email to WHMI:

“Gov. Gretchen Whitmer’s executive orders restrict the operations of businesses and entities during the COVID-19 pandemic. Willful violations of the executive orders are considered a misdemeanor subject to jail time, fines and licensing sanctions for businesses. Violations should be reported to law enforcement agencies overseeing the jurisdiction in which the offense occurred. The Attorney General’s office is aware of a few agencies that have stated they won’t enforce the executive orders, but we would remind them that a successful COVID-19 response relies on cooperation at all levels. While we are all anxious for a court to provide additional clarity, taking the position that the Governor’s executive orders are presumptively invalid—a position no court has agreed with—is wrong and places the public health and rule of law in jeopardy. The Governor’s orders are presumptively valid until and unless ruled invalid by a court—not the other way around. Further, the Attorney General issued a letter of guidance to law enforcement last week affirming the enforceability of Executive Orders 69 and 70. Thus, it’s not that these local law enforcement agencies can’t enforce the orders, they simply don’t want to.”