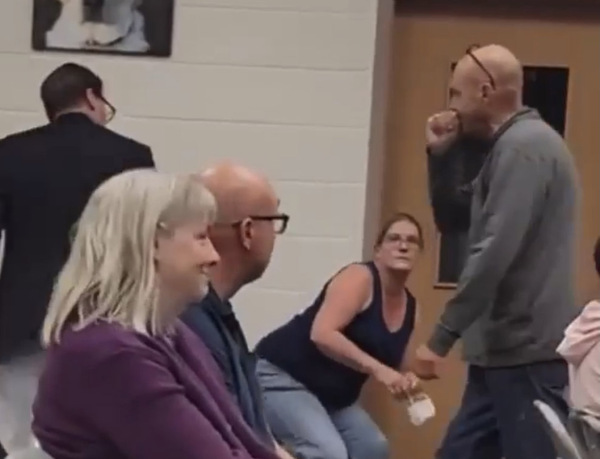 
The Livingston County Prosecutor’s Office has declined to seek charges against a Brighton school board trustee after he was accused of purposely coughing on a parent during a board meeting.

Sue Ellen Ikens of Brighton says she was told that the prosecutor would not bring charges against Trustee Bill Trombley for the September 27th incident. Ikens, who at the meeting said she had been informed only a few hours before that her daughter had been exposed to COVID, accused Trombley of bullying. Board President Roger Myers reminded Ikens that she could only address the board and not direct her comments at individual board members or the audience.

While this was all going on, Trombley appeared to deliberately cough into his microphone. After Myers ordered a 5-minute recess, Ikens approached the board table, pointed at Trombley and said, “I’m not scared of you!” Myers warned her that she would be removed if she didn’t sit down. She complied, after which a cell phone video showed Trombley walking past her and coughing again while holding his hand over his mouth.

Ikens filed a police report the next day with the Brighton City Police Dept. In her statement to police, she said that “In a COVID environment, Mr. Trombley’s actions are dangerous, insensitive and malicious assault.”

In response to the decision not to seek charges, Ikens told WHMI that Trombley “has a responsibility to his fellow BAS Board members, constituents, teachers and staff, district parents, and, most importantly, the children of Brighton Area Schools to behave in a professional manner that is beyond reproach. His behavior at the meeting, according to the Livingston County Prosecutor, did not rise to the level of criminality. But Mr.Trombley’s behavior was certainly not beyond reproach. Whether his actions were malicious, reckless, or simply careless, they put every person in the boardroom at risk. He owes all the individuals in the room that night a sincere apology.”

Trombley, meanwhile, told WHMI that he’s not surprised the prosecutor was against pursuing charges, saying, “Since when is it a crime to cough?” He also indicated that he has consulted an attorney and plans to pursue legal action of his own. Asked what that might entail, Trombley said, in his words, “I don’t know - that’s up to the lawyers.” Trombley declined to name the law firm which he said is representing him. However, he feels there is enough substance in what he told attorneys to warrant legal action. “If there wasn’t something there, they wouldn’t take (the case),” he said.

The Brighton Board of Education will meet again in regular session on Monday, Oct. 25th, at 7 p.m. at the BECC building at Church and East Main streets.