Board Meeting Derails Over Quarantine Issue 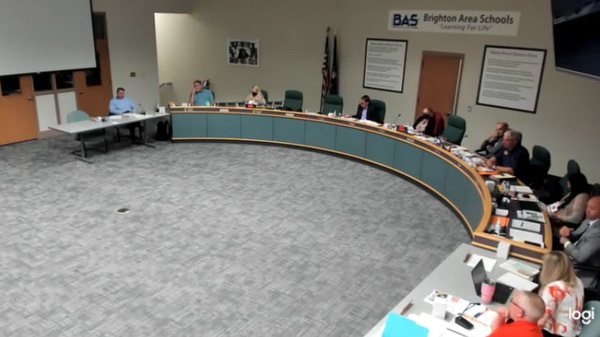 
The touchy subject of quarantining students came up at the Brighton Board of Education meeting Monday night. Several parents addressed the board, stating that because so few students who were quarantined actually got COVID, the policy makes quarantining punitive and puts those students behind their peers in the classroom unnecessarily.

One parent, identifying herself as “Jeannine”, said that in the last 18 months, 3,600 children in Livingston County between the ages of 0 and 19 had positive COVID tests, and of these, nine were hospitalized. However no COVID deaths occurred during this period, which she called “a 100% survival rate.” In the Brighton Area Schools last year there were 305 positive cases which led to between 8,000 and 9,000 students being quarantined. The parent said, in her words, “The quarantine policy isn’t accomplishing anything but keeping kids out of school,” adding, “only five out of 8-9,000 cases were identified as possible in-school transmissions, making (the students) miserable because they’re missing out on social contacts, extracurricular programs and academic instruction.” She concluded by saying, “Quarantining needs to end; let’s return to common sense practices of keeping kids out of school only when they’re sick.” Others in the audience also said that quarantining is a bad policy that needs to be overhauled or eliminated. The board and administration did not immediately respond because it is not the district's policy to respond to commenters at the call-to-the-public.

District parent Sue Ellen Ikens, also addressing the board, said she learned to her dismay that her child had been exposed to COVID in school Monday. She criticized the audience, saying she is seeing the “same names and faces” of people from Fenton, Hartland and Howell at the meetings when it’s what she called “a left-right issue.” Ikens objected when Board President Roger Myers told her she couldn’t criticize the audience. He later chastised her when she directly addressed a board member, accusing Trustee Bill Trombley of “bullying,” to which Myers said she couldn’t directly address a board member or any individual. Ikens, claiming to have knowledge of Michigan case law, said a Supreme Court ruling allows a person to address individuals at local government meetings, to which Myers - himself an attorney - disagreed. He then called for a 5-minute recess after Trombley appeared to purposely cough into the microphone in response to Ikens. During that break, Ikens approached Trombley at which point Myers threatened to have her forcibly removed if she did not sit down. Ikens then turned around and walked off camera before saying “I’m not scared of you” as both Myers and Trombley walked in the same direction. Myers reportedly spoke to Ikens during the break. Ikens was then allowed to finish her comments, which no longer mentioned any names.

However, several people present at the meeting say they saw Trombley intentionally cough in Ikens direction as he approached her. One of them, Anna Gibson, followed up with an email to Superintendent Matthew Outlaw and board members in which she said she “was appalled that a board member would walk past a parent, lean over, and purposefully cough at her multiple times.” Gibson said she still can’t believe that “a person who is charged with protecting my children could be so callous about a deadly disease” and requested Trombley apologize to both Ikens and everyone who witnessed it.

WHMI has also sought comment from Trombley but has yet to hear back.

The board will meet again on Wednesday in a workshop session at 6 p.m. to go over the procedures for conducting job performance evaluations on the superintendent and to discuss long-term funding for the Pack of Dogs program. The board will also conduct a closed session on a matter involving attorney-client privilege — an agenda item that was to have taken place Monday night but was moved to Wednesday.