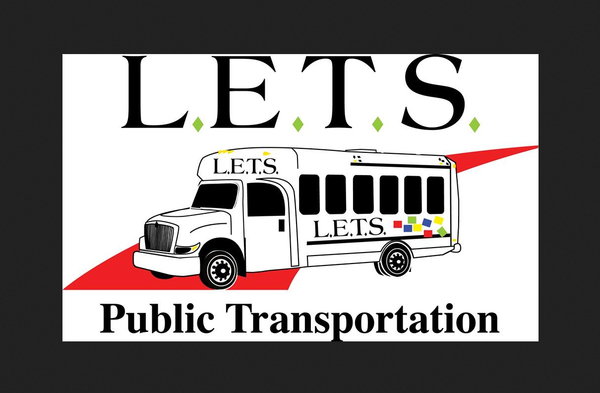 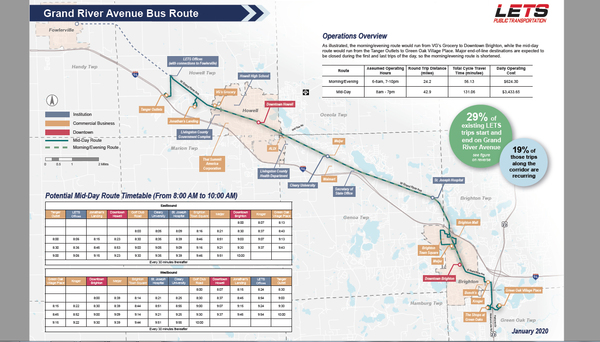 The Livingston Essential Transportation Service is looking to apply for a grant that would allow for dedicated bus service along Grand River.

The 2019 Master Transit Plan study determined 29% of existing LETS dial-a-ride trips start and end within a half mile of Grand River and about 19% of those trips are for recurring purposes such as employment and education. There were 43,000 dial-a-ride-trips in 2019. The plan recommended establishing scheduled, fixed route service along the Grand River corridor to provide more reliable and efficient service than what’s possible with the dial-a-ride transit. The dial-a-ride service will then shift capacity to areas of the county with lower population density where the need is greater for such service. LETS is requesting authorization to apply for $613,000 in federal grant funding and $153,250 in state match funds for a total of $766,250 to purchase six additional medium-duty buses. The Congestion Mitigation and Air Quality Improvement Program is a federally funded program administered by SEMCOG that aims to improve air quality and relieve congestion.

LETS Director Greg Kellogg says they have a limited number of vehicles and drivers so implementing the fixed route would free up the other dial-a-ride buses to provide additional service in the less densely populated areas of the county. Kellogg tells WHMI residential and commercial development has increased tremendously over the last couple of decades and definitely warrants a fixed route bus – which would be a valuable service for the growing community. There would service every half hour at several stops between Howell and Brighton along Grand River. Some of the proposed stops to the west include the Tanger Outlet Center and the LETS office at Grand River and Burkhart Road. Kellogg says there would be a connecting shuttle between Fowlerville and the LETS Office so Fowlerville residents can also access the fixed route. Other stops include Downtown Howell, Golf Club Road, Cleary University, St. Joseph Mercy Livingston Hospital, Brighton Towne Square, Meijer and downtown Brighton – with the service ending at the Green Oak Village Place Mall. Kellogg says they are planning for some sort of shelter at certain locations.

Based on providing half-hour service, six buses are needed and Kellogg says they wanted to get the bus purchase portion taken care of before they approach stakeholders for the operational share they need. Kellogg says its estimated they would need around $1.1 (m) million annually to operate – half would come from federal and state funds and then around $500,000 would need to come from some type of local contribution. He says the plan is to approach stakeholders along Grand River such as the local business community and local units of government along the route. Kellogg says the service would be a huge benefit to the business community as well as the citizens and thinks this would be a reasonable way to approach it and spread the cost around. However, he noted they wanted to come up with a plan first to secure the six buses needed to operate the service.

A resolution for LETS to apply for the grant funds will be before the General Government & Health and Human Services Committee of the Board of Commissioners on Monday night.
The resolution clarifies that LETS is not obligated to use the expansion funds for vehicles if the proposed service does not materialize and will seek approval from the board if it becomes necessary to revise the scope of the grant. Kellogg said he was pretty confident they could repurpose the scope of the grant for something like replacement buses if the service doesn’t materialize but he’s hopeful and they’ll apply for the grant. (JM)