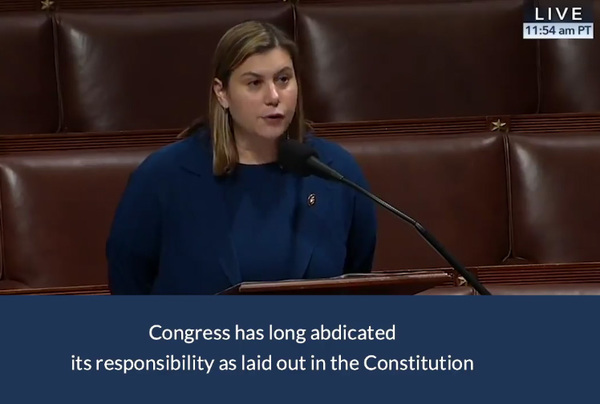 Despite an expected veto from President Trump, the U.S. House passed on Thursday a war powers resolution submitted by Congresswoman Elissa Slotkin.

The measure, introduced on Wednesday by the 8th District Democrat, passed 224 to 194, mostly along party lines. Eight Democrats voted against it, while just three Republicans and U.S. Rep. Justin Amash, I-Cascade Township were in favor. It would require the Trump administration to obtain Congressional approval before using military force against Iran. It follows the killing of a top Iranian general last week that was ordered by the President and resulted in a missile attack Tuesday night on Iraqi bases that house U.S. troops. The five-page resolution orders Trump to end the use of armed forces against Iran unless Congress declares war or determines force is necessary to defend against an “imminent armed attack” on U.S. allied forces. Despite passage in the House, Republicans in the Senate are unlikely to approve the measure, which is a special type of resolution that doesn’t get the president’s signature. In addition, the two parties disagree over whether it would have the force of law even if it does pass Congress.

Slotkin said the resolution was intended to make clear that, “…if the President wants to take us to war, he must get authorization from Congress,” adding that, “This is simply what our Constitution requires. If our loved ones are going to be sent to fight in any protracted war, the president owes the American people a public conversation about why and for what ends." Slotkin, a former CIA analyst and Pentagon official who served several tours in the region, said that as an Army wife with a step-daughter and son-in-law currently on active duty, and who could very well be deployed to the Middle East, she feels strongly that, “Congress has long abdicated its responsibility, as laid out in the Constitution, to make the hard decisions we owe our troops and our country when it comes to authorizing war. We owe it to our military –– and to ourselves as a nation –– to provide our troops clarity, and to abide by the Constitution that they have sworn their lives to protect.”

House Minority Leader Kevin McCarthy, R-Calif., argued the resolution is unconstitutional and ties Trump’s hands at a critical moment that will “make Iran believe it has allies in the House of Representatives.” But the criticism of the administration’s rationale for the targeted killing only increased following a Congressional briefing with top national security officials Wednesday, with key Republican Senators Mike Lee of Utah and Rand Paul of Kentucky saying it had not only failed to persuade them the killing was justified, but had actually convinced them to support a similar war powers resolution being pushed forward by Democrats there.

But most other Republicans remained supportive of Trump’s actions and highly critical of Slotkin’s resolution. Representative Liz Cheney of Wyoming, daughter of former Vice President Dick Cheney and the third-highest member of the GOP House leadership tweeted that, “The War Powers Resolution just introduced by @RepSlotkin dishonors every member of America’s armed forces by equating Iranian attacks against our men and women in uniform with U.S. action to kill the world’s deadliest terrorist.” She added the hashtag #Disgrace. (JK)