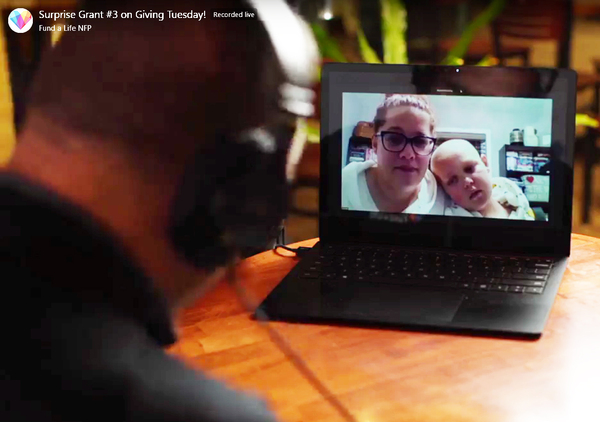 
A young boy and his family enduring a second battle with cancer treatment were instead treated to a grant from a local nonprofit to try and ease their financial burden.

9-year-old Brock Meader had already successfully completed three-and-a-half years of cancer treatment in June when he was diagnosed just a few weeks later with MDS - a rare blood disorder that’s also referred to as cancer. In preparation for an expected bone marrow transplant, a GoFundMe was set up for Brock, who lives in Stockbridge, but attends Howell Public Schools.

On Tuesday, the Brighton-based Fund a Life organization selected Brock as the recipient of a $10,000 grant. Founder Mark Howell made the announcement on Giving Tuesday as Brock and his mother, Christa Meader, joined him via an online connection.

Brock received a bone marrow transplant in September and is now recuperating while making twice-a-week visits to Mott Children’s Hospital in Ann Arbor.

The grant was one of three that Howell and Fund a Life gave out for Giving Tuesday. 8-year-old Tiffany “Cupcake” Henry and her family, from Highland Township, received $15,000 to help pay down medical bills and outstanding home renovation costs that were necessary to bring Tiffany home from the hospital after a heart transplant. Also receiving a grant was Amanda Mutschler, a Brighton area resident and stage 4 breast cancer "battler" whose fight recently took an unexpected turn as cancer spread to her brain. Howell says thankfully she had successful surgery to remove it "but the battle is only beginning. Amanda has suffered major side effects with a rigorous treatment quickly approaching where she will need a lot more attention and care round the clock."