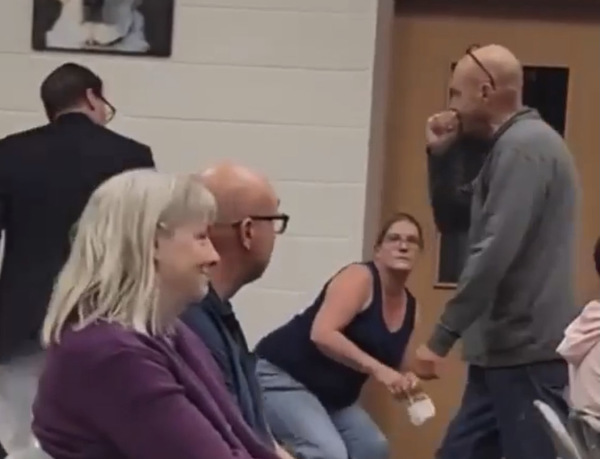 
A Brighton woman has filed a police report following an incident involving a board member at Monday’s meeting of the Brighton Area Schools Board of Education which she called a “dangerous, insensitive and malicious assault.”

Sue Ellen Ikens filed a statement with the Brighton Police Department on Tuesday about the incident, which occurred as she was addressing the board on the issue of student quarantine, expressing her dismay that her child had been exposed to COVID in school the previous Friday. Brighton Police Chief Rob Bradford confirmed for WHMI that they have received a statement from Ikens and were investigating.

As she spoke, Trustee Bill Trombley appeared to intentionally cough into the microphone, prompting Board President Roger Myers to call for a 5-minute recess. During that break, Ikens approached Trombley at the board table which led Myers to threaten to have her forcibly removed if she did not sit down. Ikens then turned around and walked off camera before saying “I’m not scared of you” as both Myers and Trombley walked in the same direction.

In her statement to police, which Ikens provided to WHMI, she said as she proceeded to sit down, Trombley approached her and resumed coughing. “He made eye contact with me and kept walking toward me as he coughed. Bill Trombley’s hand was positioned under his nose, and perpendicular to his nose, with an arch. As he approached me, his coughing intensified. The result of his hand positioning, his head positioning, and the increased forcible projection of his cough was that I was showered by his cough.”

Meanwhile, a cell phone video of the encounter has emerged on social media which shows Trombley following Myers out of the board room. As he initially approaches Ikens, who is standing at a podium, Trombley holds his hand to his mouth and forcibly coughs into it, although the view is partially blocked. Myers then motioned for Ikens to sit down, and as she does so, Trombley continued to cough into his hand as he passes her. Myers can then be heard loudly saying “Bill!” Myers reportedly spoke to Trombley during the break. When the meeting resumed, Ikens was then allowed to finish her comments.

One parent who witnesses the incident, Anna Gibson, emailed Superintendent Matthew Outlaw and board members in which she said she “was appalled that a board member would walk past a parent, lean over, and purposefully cough at her multiple times.” Gibson said she still can’t believe that “a person who is charged with protecting my children could be so callous about a deadly disease” and requested Trombley apologize to both Ikens and everyone who witnessed it.

Ikens, in her statement to police, stated that “In a Covid environment, Mr. Trombley’s actions are dangerous, insensitive and malicious assault.”

Myers told WHMI on Tuesday that he had tried to de-escalate the situation and that while he "never witnessed Mr. Trombley cough on anyone, it obviously would be egregious for anyone to deliberately cough on another person." After viewing the new video footage, Myers told WHMI, “The video shows what I described had occurred in my last comment, most of which was also captured in the school's video albeit from a slightly different vantage point. As far as Ms. Ikens' intent to lodge a complaint with the Brighton PD, I really have no comment on that.”

A request for comment was also made to Trombley, but has yet to be returned.