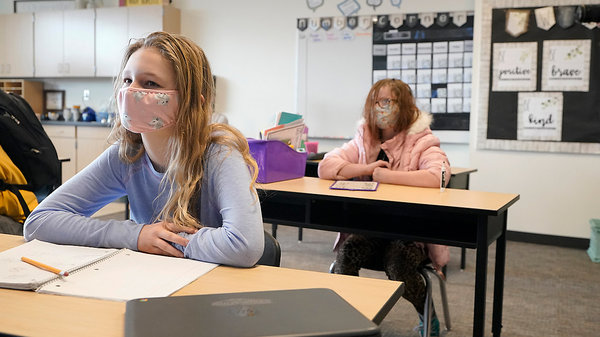 
**This story has been updated to reflect that one of the doctors who consented to be included on the letter has since changed his mind.


A letter signed by more than 60 local health professionals has been sent to local and state health officials in support of a universal mask mandate for Livingston County Schools.

The letter (which is posted below), is dated August 26th and was facilitated by Dr. Raymond Smith of Brighton, who tells WHMI that it was disseminated via Google Docs and electronically signed by a total of 64 medical professionals, including 45 doctors and 9 nurses. It was emailed Tuesday morning to a variety of public health officials, including Livingston County Health Department Director Dianne McCormick, Elizabeth Hertel, the Director the Michigan Department of Health & Human Services and Dr. Joneigh Khaldun, the Chief Medical Executive for the State of Michigan.

In it, they state that they are writing as “Physicians and Advanced Practice Providers who live in, work in, and/or provide health care for residents of Livingston County in public support for Livingston County Health Department and MDHHS to mandate universal masking for children in schools this fall.” So far, state health officials have declined to issue such a mandate, instead recommending that local health departments make that call. To date, the LCHD has recommended that school districts require universal mask usage, but has not mandated it. Meanwhile, health departments in Genesee, Wayne and Oakland counties are among those that have instituted some form of mask mandate.

Dr. Smith and his wife live and work in Brighton, where he practices family medicine and she is a psychiatrist. In addition, their three children attend Brighton Area Schools. Smith says they are very well vested in their school and community and feel in-person learning is extremely valuable to a child’s social growth and development. As physicians, Smith says they not only have obligations to their patients but to the greater good of their community. Due to the rise in COVID-19 prevalence per-capita in the county, he’s concerned there going to see increased infections - which will lead to more missed time from school and work, more testing, more quarantines, more hospitalizations and sickness-related morbidities and potentially even mortality.

Smith told WHMI he feels there are political pressures are at play that want to keep some leaders at bay from putting forth too many mandates and restrictions on people and parents. Smith said it’s interesting how prominent things have been in the past in the county and how it’s kind of been a step back this year - although some county health departments are taking the lead with instituting mandates. Smith said Livingston “has the highest case rate per capita of everyone around us but yet there are zero mandates in place or universal masking policies”. He said the statistics out there are interesting – noting “the numbers change every day and every week but when you start watching trends, you gotta be more vigilant”.

The letter goes on to say that in light of the delta variant surge, it is “imperative that the schools follow the CDC, MDHHS, and LCHD recommendations regarding universal mask use,” adding that the delta variant is more than twice as contagious compared to the previous strain circulating last school year, with children younger than 12 “particularly vulnerable” as they do not yet have access to the COVID-19 vaccine. “When children are infected with the COVID-19 virus, even if they have few to no symptoms, they can develop a number of other conditions after the COVID infection including respiratory problems, myocarditis and other cardiac conditions, loss of smell and taste, developmental issues, mental fatigue making learning more difficult, physical fatigue, headaches, mental health effects, MIS-C, and “long haul COVID-19.”

The letter also includes statistics from the CDC that show Livingston County had the highest case rate of surrounding counties for the seven day period that ended on August 24th at 201.5 cases per 100,000 residents. By comparison, the next highest rate, according to the letter, was Jackson County at 166.55 cases per 100,000. Neighboring Ingham County, where there is no county-wide mask mandate, but many districts have implemented their own, it was just 88.23 cases per 100,000.

The letter, which includes links to various medical sources about COVID-19, ends with the health professionals stating that they “care deeply about the health of Livingston County school children, educational staff and the entire community,” and ask for public health officials to please help them "care for this community by mandating universal masking outlined by all the above organizations to support the health of children.”

In response to the letter, LCHD Director McCormick told WHMI that she recognizes that those who signed the letter have a "commitment to keeping children and families healthy and safe" and she appreciates their "passion and expertise and opinion." McCormick noted that the MDHHS has "continued providing strong recommendations for schools to require mask mandates and work with their local health departments. MDHHS has said multiple times that they will not issue a mandate and is being provided as a recommendation for the schools to adopt. In Livingston County, the school boards have all made their mask policies as a choice for the parents with strong recommendations for masking, unless mandated by MDHHS or LCHD. To that end, we are working very closely with the schools in monitoring the case data. Most of the cases are being driven by adults and most of the kids testing positive are cases based upon a household exposure or exposures not associated with the schools. Sometime next week, we hope to roll out, in conjunction with the schools, a voluntary alternate quarantine strategy that will incorporate in-home testing with kits provided by LCHD to the families for the children with an exposure in the classroom setting. Test results will be submitted back by the parent daily to LCHD. This will keep the exposed child in the classroom and will require they wear a mask in school for the duration of their quarantine should parents enroll in this voluntary program. More information will be coming out soon.”

"MDHHS encourages all eligible Michiganders to get the safe and effective COVID-19 vaccine as soon as they are able. The vaccine is our best protection against the virus and how we can end this pandemic together. To locate a vaccine, visit VaccineFinder.org." Sutfin says that the state is "committed to ensuring that Michigan students and educators are safe in the classroom," and noted that they recently strengthened their school guidance to strongly recommend a universal mask mandate in schools along with other CDC-developed prevention strategies that schools and local health departments can use together to reduce the spread of COVID-19, maintain in-person learning and protect people who are not yet fully vaccinated. "Several local health departments and many school districts have already moved forward to require masks in schools; we applaud their efforts and encourage all Michigan districts to follow their lead. We continue to work closely with school administrators and local health departments to advise on masking and prevention strategies and will continue to monitor the school population closely.”

Meanwhile, one of the doctors who consented to be included in the letter has reportedly changed his mind. Dr. Smith tells WHMI that Dr. Bipin Desai, of the Livingston Pediatric Center, “acknowledged the letter and didn’t realize signing it would create such a political uproar in his patient population with over 25 calls this morning, so he would like his name removed now and to be politically neutral on the topic.” WHMI has reached out to Dr. Desai for comment, but has yet to hear back.