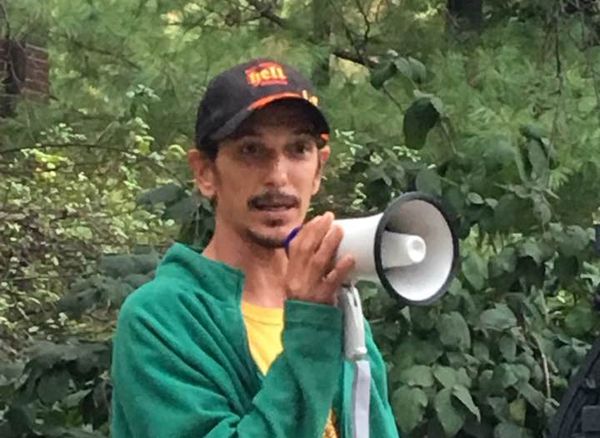 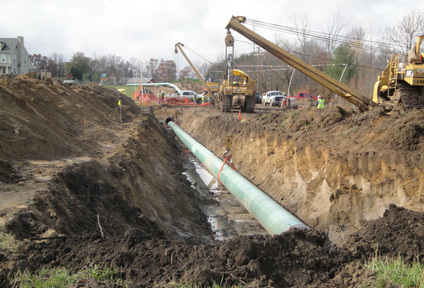 
A lawsuit filed in federal court alleges that the Livingston County Sheriff’s Office was compromised in its duties when it entered into a contract with the security company hired to protect the installation of a controversial natural gas pipeline through Livingston County.

The suit, filed October 13th in U.S. District Court in Detroit, was brought by Flint resident Matthew Borke against Texas-based Leighton Security, it’s CEO Kevin Mayberry and Operations Manager Gary Washburn, along with Energy Transfer Partners, the company behind the ET Rover pipeline, and it’s Chairman Kelcy Warren. Borke is a member of Michigan Residents Against the ET Rover Pipeline, a grassroots group that opposed the construction of Energy Transfer Partners’ Rover gas pipeline in 2017. The 42-inch diameter pipeline carries 3.25 billion cubic feet of natural gas per day up from the Marcellus and Utica Shale through West Virginia, Pennsylvania and Ohio, crossing into Michigan in Lenawee County, then proceeding north through Washtenaw and Livingston counties before joining the Vector Pipeline in Fowlerville, where it crosses the state into Ontario, Canada.

Borke claims that he was targeted by Leighton Security starting in 2016 when he was “an activist participant” in the Native American protest and occupation against construction of ET’s Dakota Access Pipeline (DAPL) in North Dakota. Leighton was ET’s general contractor providing security for that effort. In the filing, Borke says a subcontractor for Leighton, Tiger Swan, used overly-aggressive methods to disrupt the protestors, culminating in his being arrested by “15 men in military fatigues (who) had submachine guns trained on him.” He alleges they wore no insignia, badges or name tags and handcuffed him with zip ties and confiscated his phone. Charges of “interfering with a government function” were later dropped. While a state administrative board found Tiger Swan guilty of working without a state-required license to perform security operations in North Dakota, an injunction to prevent the company from operating in that state was later dismissed. However, Borke says because the tent encampment in North Dakota he was living in was bulldozed and most of belongings destroyed, he ”reluctantly” returned to his parent’s home in Michigan.

Borke says beginning in March of 2017 he began attending meetings of Michigan Residents Against the ET Rover Pipeline in the Pinckney area. He says that was the same time the Livingston County Sheriff’s Office entered into an agreement with “agents or contractors” of Energy Transfer Partners and began providing security at the ET Rover pipeline sites for $60 an hour, utilizing deputies in uniform and departmental vehicles. Borke claims that over the next several months, he and other member of the group were subjected to harassment and intimidation by employees of Leighton Security, which the lawsuit alleges was supported in its activities by the Livingston County Sheriff’s Office through its contract.

One of the incidents outlined in the lawsuit involved a tunnel that was bored for the pipeline to pass beneath Portage Creek in Putnam Township utilizing a method known as Horizontal Directional Drilling (HDD). Borke says Livingston County deputies began 24/7 security at that site starting on October 9th, 2017. He says after he had been invited by a private property owner to camp on land about a quarter mile away from that site “it became clear that Livingston County deputies were present to keep local residents who were volunteering as citizen monitors” away from the drilling location, even though the creek is a public waterway. Borke says the monitoring was especially important as the Michigan Department of Environmental Quality (the MDEQ was the name of the agency now known as the Michigan Department of Environment, Great Lakes, and Energy, or EGLE) had just three months earlier requested that area residents serve as the, “agency's extended eyes and ears and report anything unusual while the Rover pipeline is being constructed, such as excessively muddy water.” He says the necessity of that monitoring became clear just two days later, on October 11th of 2017, when he reported to state and federal authorities the “strong odor of gasoline in water being released from the Rover construction site.” He says an agent with the MDEQ’s Water Resources Division met him at the site and agreed the Rover easement site near the tunneling location did indeed contain a strong odor of gasoline.

The lawsuit claims that ET’s onsite environmental specialist asserted the odor was from naturally occurring swamp gas, although water samples taken by an MDEQ analyst led to a citation against ET for a violation of the Clean Water Act by “releasing petroleum contaminants into the local watershed.” The MDEQ theorized that the petroleum had come from the site of a nearby former gas station and was released by the “dewatering process…employed for the pipeline installation and…discharged to the wetland.” EGLE Spokesman Nick Assendelft says Rover shut down pumping at that location on the day they issued the violation notice. “Rover was required to obtain a National Pollutant Discharge Elimination System Permit and install a dual carbon-filtration treatment system. Pumping resumed on Dec. 1, 2017.”

The suit claims that just a day after that citation, Leighton Security helped to create a “security assessment” claiming Borke had been seen pouring fuel on the property. Borke says that report, which he claims included a photo taken of him during the protest in North Dakota, then found its way to the Livingston County Sheriff’s Office, where it was distributed to “other Sheriff agents.” Borke strongly denies he did anything to contaminate the water and says he was never contacted by any law enforcement agency, much less charged or prosecuted. He says he only ever learned about the assessment when Livingston County Sheriff Mike Murphy allowed Borke to search his computer after filing a Freedom of Information Act request.

Borke says his main purpose in filing the lawsuit is to highlight what he sees as a disturbing trend of private corporations entering into contracts with publicly-funded law enforcement agencies. He says his experience with Leighton Security and the ET Rover Pipeline only serves to underscore that such partnerships undermine the essential role of law enforcement agencies to serve and protect the citizens that fund them as opposed to the interests of private corporations. He says what is best for the public at large is often at odds with what is best for private enterprise.

In response to the lawsuit, Sheriff Mike Murphy said his office has several short term and long term contracts. “For example, we provide dedicated service to Tyrone and Putnam Townships for a fee (long term). We provide dedicated patrols for various subdivisions and HOA’s, as well as events, such as Easy Riders, Fowlerville Fair, etc… (short term). As with any of these contracts, it is simply to dedicate resources to maintain the peace, prevent damage and enforce the law(s), regardless of who is paying the bill, instead of relying on resources when and if they are available.”

Overall, the lawsuit claims the Sheriff’s Office was paid at least $270,000 for its contract with Leighton. However, it also claims that, just as was the case with Tiger Swan in North Dakota, Leighton never registered with the Michigan Department of Licensing and Regulatory Affairs (LARA) as a security contractor, as required by law. LARA confirmed that fact in August of 2019 and referred the case to both the Washtenaw and Livingston County Prosecutors Office for further action. The Washtenaw County Prosecutor then referred it to the Washtenaw County Sheriff’s Office, which declined to take the case, “due to (the) potential crime occurring in areas greater than (their) jurisdiction” and said the matter would best be investigated by the Michigan State Police or the Michigan Attorney General’s Office. Livingston County Prosecutor Bill Vailliencourt declined to prosecute the case, because “The administrative investigation did not provide sufficient legally admissible evidence to meet the standards for criminal charges. LARA has been advised that, if they wish to conduct additional investigation and review, they can resubmit the matter for review.”

Livingston County resident John Machowicz, also a member of Michigan Residents Against the ET Rover Pipeline, subsequently filed a complaint with LARA, along with former Leighton Security employee Robert Heath. The lawsuit says Heath was later terminated by Leighton in retaliation for his “legitimate LARA complaint” against the company. A follow-up complaint was also filed with the Michigan Attorney General’s Office, which has declined to take up the issue.

The lawsuit is seeking damages from the defendants on three counts. The first alleges a federal conspiracy to deprive Borke of his First Amendment rights to free speech and Fourth Amendment rights against “unreasonable searches and seizures and associated threats and harassments to his person and property…” The suit alleges that conspiracy included “compromise of law enforcement in the Silver Lake area by contracting with the Livingston County Sheriff, effectively privatizing the Sheriff’s Department into a private security force for Energy Transfer and Leighton Security and using the Department to broadcast false claims and rumors of ecoterrorism, vandalism and criminal misbehavior against Plaintiff and also as a force for intimidation of those who would oppose the construction of the Rover pipeline.” The second and third counts claim Borke suffered “emotional pain and suffering” and “lost or foregone economic opportunities” due to efforts by the defendants to discredit and defame him.

No further dates have been set in the case. Request for comments to both ET and Leighton Security went unreturned. A copy of the lawsuit is posted below.