GAME OF THE WEEK: Brighton at Hartland 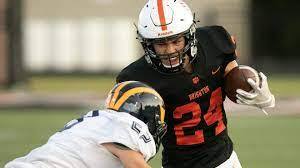 Brighton Bulldogs (2-0) at Hartland Eagles (1-1)
OUTLOOK: Everything is coming up roses for the Bulldogs, but now Brighton faces its first true road test at hostile Hartland.
These are rivals and they don't always like each other which could lead to salty play at times. Brighton is playing with grit and maturity after dashing to a 30-0 first quarter lead during an easy 43-6 victory over Plymouth Salem.
Running back Carson Shrader ran for three touchdowns in the first quarter on runs of 18, eight and one yard. He also caught an 18-yard touchdown pass from quarterback Grant Heatherton, who has done a fine job after senior Colin McKernan was injured in the season-opener against Dearborn Fordson.
Hartland plays two quarterbacks. James Butzier is a dependable guy with good running ability and a strong arm. Sam Clay plays with more flair. Both moved the ball well during a 13-10 loss to Novi. But holding penalties resulted in two touchdowns being erased from the score board.