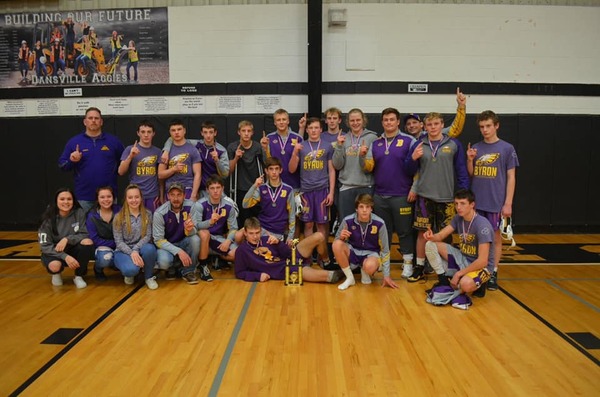 Sarah Marvin, a sophomore at Byron High School, played football last year on the Eagles JV team, where she was an offensive and defensive lineman. She’s the starting point guard on the Byron girls basketball team, where last week she had a game where she scored 12 points and pulled down 20 rebounds. In the spring, she’s a thrower on the track team. But, she says, it’s a fourth sport that she finds the most challenging. It’s wrestling.

“It’s the hardest sport you can do, physically mentally. It’s just exhausting,” she said. “It’s on a different level. You can be in the best shape of your life and you still get very tired after a match. People don’t realize how difficult it can be. It’s the hardest six minutes of sports you’ll do,” she said. “It’s way harder than one quarter of basketball, It’s way more physically tiring. You’re just constantly going. It’s so much more physical. It’s physically and mentally tiring.”

Sarah Marvin was born into a wrestling family in Byron. Her father, Tim, her three brothers and her fraternal twin sister, Becky, all are current or former wrestlers. Her uncle, Jerry Hall III is Byron’s coach, and two of her cousins, Jerry and Zach, are standouts on the Byron team. And, as it turns out, her aunt Rachel was the first girl to compete in wrestling at Byron more than 20 years ago. More on that in a moment.

Sarah grew up wrestling and playing football, but had mostly stopped after the eighth grade because of her basketball commitment and she didn’t have the upper body strength to compete with boys her age and older. Her wrestling career was invigorated, and then some, when the Michigan Wrestling Association, which is made up of high school coaches around the state, announced it would be holding a girls state tournament at Adrian College next Sunday, February 3rd. Sarah signed up for that and got three other girls at Byron to join her, including her sister Becky, who all took up the sport for the first time this year.

“When we found out they were doing a state meet for girls, I was like I’ll try it and see how it goes,” she said, adding that things have been good so far. ”We had a tournament last weekend and I pinned the three girls I wrestled. They were new, because it’s a new sport.”

Becky actually won four matches, taking the fourth when sister Sarah defaulted because the girls didn’t want to wrestle each other. That won’t be a problem next Sunday. Becky will compete in the 189-pound class, while Sarah will wrestle in the 215-pound weight class. Weight classes in wrestling don’t reflect an actual weight, but a maximum in order to compete in that class. The Marvin sisters, along with another basketball player, sophomore Skylar Lewis, work out a couple of times per week and compete at Saturday tournaments. They are listed on the varsity roster so as to be eligible for the state tournament. A fourth girl, Emily Williams, is a junior who runs cross country in the fall and plays soccer in the spring. She competes at 125 pounds and is a novice, having joined the team during the winter break. She’s lost all of her matches so far, but her passion for her new sport is unabated.

“Some things i need to do, I say you know what? I’m going to win this match not matter what,’” she said. “So if you go into the match with the mindset you’re going to win, you’ll do your best no matter what.”


The girls are coached by Tim Marvin and the former Rachel Zakoor, whose presence on the team was merely tolerated at first by one of her teammates, Jerry Hall III. “At first, to be honest with you, I didn’t like it at all,” he said. “But then she came out and won some matches, for us, I said, what the heck, this will work. But now I’m used to it.”

It helped that Rachel picked up the sport quickly. She won more than two-thirds of her matches in her two years on the varsity, while competing in cross country and softball. Oh, and Jerry got over his initial objections. He and Rachel have been married for most of the last two decades. Rachel Hall will be accompanying her nieces as a coach next Sunday.

“It’s really exciting because two of them are my nieces and they’re great for each other as wrestling partners,” she said. “But it’s interesting to see someone who’s starting a sport that’s fresh and new how eager they are and how quickly they catch on. They’re eager to learn. You don’t need a lot of moves.”

Rachel used to wrestle with her sons when they were small, but now serves as a mentor both to them and the grls she coaches. She hasn’t put on a singlet in more than 20 years, but the lessons learned have stuck with her.

“It teaches you a lot. It teaches you strength and your own mental strength,” she said. “It teaches you physical boundaries in that you have to pace yourself during a match. Because if you go all ou, you have nothing left if you make it to the end. But there are a lot of benefits just from being a wrestler. I cut weight. There were some weeks where I was a pound or two over. I had to really self-control and (exercise) self-perseverance, knowing that not everyone wanted me there. I had to find the strength within to do what all the boys had to do. I wasn’t anything special or different.”

Theresa Marvin coaches her daughters on the Byron girls basketball team. Sarah is a starter, while Becky is a reserve. She doesn’t worry about them getting injured while wrestling, pointing out that injuries can happen at anytime whether you’re playing a sport or not. She’ll be at the state tournament, which has more than 160 entrants.

“It’s just really cool, for girls athletics,” she said. “These all-girl meets, there’s such girl power at the meets, and so much enthusiasm for the sport.”

The event also has a presenting sponsor in the Michigan High School Athletic Association. Girls wrestling isn’t an MHSAA sport at this time, but spokesman Geoff Kimmerly says the organization wants to support athletes in some of the sports it doesn’t currently have on its roster . He also didn’t rule out the possibility of a future addition to the MHSAA’s roster. Next week’s tournament could be the boost the sport needs to get there. But, right now, Tim Marvin, the Byron girls coach, says this years cntestants are getting in on the ground floor.

“I know girls wrestling has been exploding,” he said. “I’ve got several Facebook ties, there’s a new girls wrestling, either college are adding it or another state has started a girls only tournament, and that’s snowballing around the country. It’s the inaugural one, so it’s going to be smaller, but it’s not going to go backwards. It’s going to keep growing.” (TR)