Brighton turns Canton black and blue during pink out game 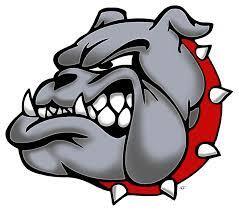 This one was dedicated to Aunt Kat, Grand Pa Stark, Aunt Lila, La La and anyone else who bravely fought cancer.
The Brighton Bulldogs turned the town pink during a 41-21 victory over Canton during a cancer awareness blowout at Bulldog Stadium Friday night. Along the way Brighton (6-0 overall, 5-0 in league play) remained the only unbeaten team in the Kensington Lakes Activities Association.
The Bulldogs have won in a variety of ways. They’ve won a pair of nail biters. They have won with superior defense. And at times coach Brian Lemons has unleashed a potent versatile offense where opponents don’t know where danger lurks.
This time the Bulldogs survived an early punch in the face and rocked the house with a 31-point second quarter. Receiver Ashton Tomassi caught two touchdown passes and running back Carson Shrader broke a 7-7 tie with a six-yard scamper with 10:46 remaining that broke a 7-7 tie and ignited the second quarter explosion.
Canton hit hard and hit first as junior bulldozer and running back Devon Pettus powered his way down the field with punishing runs. He scored at the 5:45 mark of the first quarter, creating a temporary pause on this cancer awareness celebration. But the Bulldogs struck back quickly when quarterback Colin McKernan fired a 55-yard touchdown pass to Joseph Davis less than two minute later.
“That is our response to adversity,” Shrader said. “They scored and we didn’t quit.”
Brighton finishes its home slate next Friday against Plymouth (1-5). A victory there assures the Bulldogs of hosting the KLAA championship game. After the Canton victory Lemon warned his team of becoming fat and sassy because of the unbeaten record. Teams are giving the Bulldogs their best shots and so far this team has shrugged it off and taken care of business.
“It (complacency) can be a problem,” Hetherton said. “Sometimes during practice we are off task.”
Brighton wasn’t off task for long Friday. Canton used a full house back field and a slight of hand to free Pettus on the edges. He ran for two touchdowns and was a load to bring down.
Brighton countered by using its versatile offense. McKernan, in his second game back because of injury, fired three touchdown passes, Shrader was dangerous in the back field after a slow start and pint-sized safety Ryan Velarde ignited the bench with some explosive hits.
Brighton is now 6-0 for the first time since 2000 and has a state title in its sights.
“It feels amazing,” Shrader said. “It is a great feeling to be 6-0.”