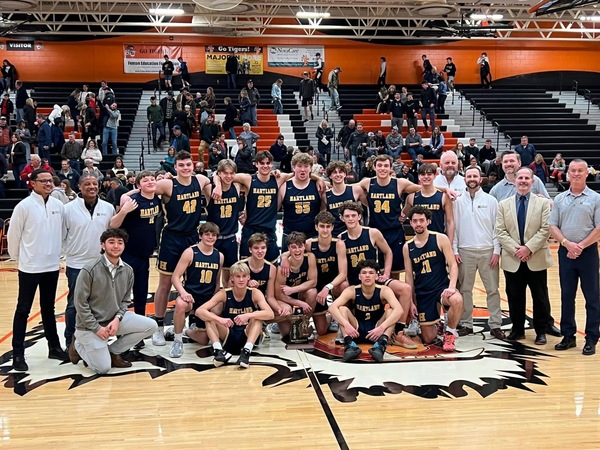 For the first time since 2016, the Hartland Eagles boys basketball team can call themselves district champions after defeating Howell 55-39 in Fenton Friday night.

The win was not only the Eagles third straight over the Highlanders this season, but it snapped a five game losing streak to Howell in the playoffs, and ended the Highlanders run of four consecutive district crowns.

Hartland only trailed once in the game which was the first bucket by Danny Honkala just 23 seconds into the contest, but responded with the first of six first half three pointers to build a 15-point lead and never look back.

Both Ryan Bohlen and Spencer Bulthuis led the way with 13 points a piece, while Logan Leppek scored 12 points off the bench.

The team now will play in the regional semifinal on Monday night from Lake Orion against Detroit Catholic Central -- and that will be our first "Game of the Week" next week with pregame coverage starting at 6:40 and tipoff at 7pm. We then will travel to Lapeer the following night for the Hartland girls quarterfinal rematch from last season with Midland Dow.

If you would like to listen to Friday's district championship game again, you can hear it in our "Inside The Huddle" podcast.