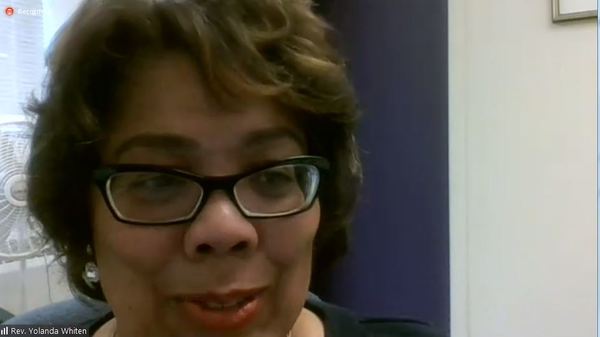 
A local pastor brought the community and guests from across the country together to have an online conversation about race in America.

Yolanda Whiten is a pastor at St. James AME Church in Brighton. Tuesday she hosted Race Conversations: A Community Education Time over Zoom. Her first guest was Dr. Fritz Francois, Chief Medical Officer of NYU. Born of immigrant parents, Dr. Francois shared the hurdles he had to overcome from assumptions made of him because of the color of his skin from as early as age 3. The first black man to graduate from NYU Medical School, Francois said he was inspired by the discouragement put upon him by school advisors. He said the message from the counselor was clear: “If you stay you are going pay a price, you’re going to carry the load, you’re going to have to work even harder in order for you to be considered just as good. So I decided to stay.” After two years, he became the first black male to pass into medical school.

Whiten’s next guest was Dr. Kyla McMullen from the University of Florida. Dr. McMullen faced similar hurdles as Francois on her way to becoming the first, and still only, woman of color to receive a PHD of Computer Science from the University of Michigan. She talked about the many micro-agressions she’s faced and still faces, calling them “death by a thousand paper cuts.” McMullen said she is sometimes confused for waitstaff at conferences because people think based on her being a black woman, that she doesn’t belong there. She said that while some people may not realize they are doing something like that, she encouraged people that if they do see it, to call it out.

The final guest was Dr. Kenneth Resnicow from UofM. He shared a presentation on the science around race and health. Resnicow pointed out that of high school aged kids, black students smoke less, vape less, and have had a fewer percentage handle a firearm in the last 30 days compared to white kids, but that many would never know this and might assume the opposite. Whiten called on people to get this information, share it, and talk about it. She said that we can become informed knowledgeable people who share what’s going on in the world, and that we have to know the truth to tell the truth.