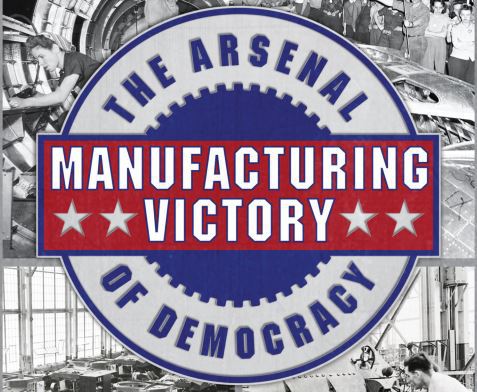 A special exhibit on the manufacturing that helped the United States win World War II is opening up at the Yankee Air Museum.

Manufacturing Victory: The Arsenal of Democracy will be coming to the museum on the grounds of the Willow Run bomber plant this Thursday. This new traveling exhibit is produced by the National World War II Museum and will be at Willow Run for all to explore through the middle of May. Julie Osborne, Curatorial Director for the Yankee Air Museum said visitors will find a lot to learn and lot to do with several family friendly interactives like videos, kiosks, and touch screens to explore.

The exhibit follows the industrial journey that took the United States from a nation unprepared for war into the superpower that helped lead the Allied Forces. It ties in the connections and importance of the Willow Run plant and the large role that women in the area performed. Osborne said that at peak production, 40% of the women in the area worked at the plant, and without those Rosie the Riveters, the outcome of the war would have been different. More information on the exhibit and everything happening at the museum can be found on their website, www.yankeeairmuseum.org. The Yankee Air Museum is located at 47884 D Street in Belleville, on the grounds of the Willow Run Airport. (MK)