Work Begins On Next Section Of Border To Border Trail 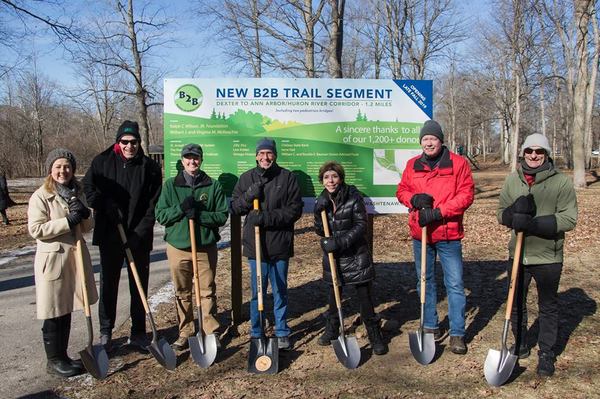 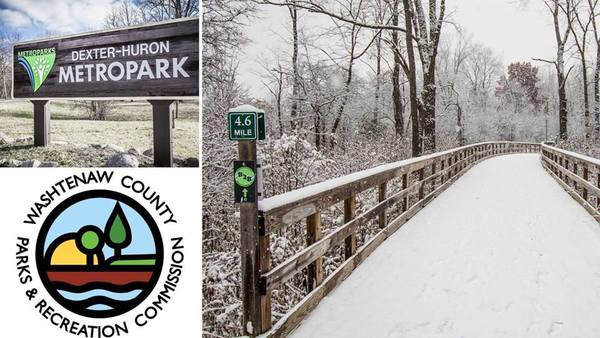 Construction is underway on another trail segment of the Border to Border extension project in the Dexter area.

The Border to Border Trail is a non-motorized 10-foot wide paved trail with boardwalks that runs through Ypsilanti, Ann Arbor and Dexter, touching on area Metroparks and city parks. In 2016, the trail was expanded to connect to the City of Chelsea, through MDNR lands in the Waterloo and Pinckney Recreation Areas and then up to Stockbridge where it makes a regional connection as part of the statewide Iron Belle Trail. It will also tie into the Lakeland Trail that runs through Livingston, Ingham, and Jackson Counties.

A groundbreaking ceremony was held in January for the latest section of non-motorized pedestrian pathway that will span 1.2 mile starting at Dexter-Huron Metropark and head east to Zeeb Road and Huron River Drive. The 10-foot wide asphalt trail will include six segments of boardwalk and two bridges spanning the Huron River. Building those bridges will actually expand the usable area of Dexter-Huron Metropark by opening up roughly 18 acres currently inaccessible to the public because it’s cut off by the river and the railroad in Dexter. A groundbreaking ceremony was held in January and work should be done sometime in late summer or fall.

Park Planner Peter Sanderson with the Washtenaw County Parks and Recreation Commission they’re starting now because of challenges with the river - they want to try and do as much as possible during the non-peak river use season to not obstruct paddlers or other fisherman from using the river. He says they will be doing all sorts of work throughout the winter, which will involve tree clearing, large scale earth moving and some bridge abutment work - although the challenge there will be dealing with the flood stage of the Huron River. Sanderson says there will be a fence in part of the area, in the M-DOT rail corridor, where they are doing a small section of rail with trail to preserve a large section of oak trees. He says those are the early steps but people will really start to see it take shape in the spring and summer, adding a number of boardwalks will also go in but those are more of a mid-stage operation.

Sanderson says the trail in Dexter is heavily used, noting they have some permanent counters installed in that area. Sanderson says they’re getting a lot of use, with somewhere around 1,200 passes by the sensors every day – which is especially significant for a city that only has about 5,000 residents. The new segment connects into Dexter by the Cider Mill and Sanderson says they are working with the City on a signage plan or inter-city routing plan to connect over to the Hudson Mills section. Right now there are a couple of access options; go through residential streets by library and tie into the trail that way or also go right down main street and through the Central business district and tie in that way, also crossing the city park system with Mill Creek park right there.

Other trail connections projects are also continuing this year. Another trail section will be breaking ground later this year, while another segment is currently under construction on the east side of Chelsea. The Dexter-Chelsea connection totals 2.1 miles. It starts at Freer Road by the railroad and travels east, south of the railroad, which is part of a broader connection between the City of Chelsea and Dexter. Finally another project wrapped up on the northwest side of Chelsea and opened in early December. The Chelsea-Stockbridge connection totals 2.6 miles and begins at Werkner Road and basically parallels M-52 before ending at the MDNR Green Lake campground in Chelsea. Sanderson says they anticipate extending that by another 2 miles this year, all the way up to North Territorial Road at M-52. At that location by the Lyndon Township Hall, they will be constructing a trail head parking lot with standard amenities such as water, restrooms, parking, signage and maps. All in all, it will end up being about five miles in total length there. Sanderson added along the Huron River Corridor is where they are trying to connect Dexter and Ann Arbor together, which is where the Dexter-Huron to Zeeb section comes from. That is the first phase of what will total seven phases in another extension.

Sanderson noted they do a lot of environmental work with the trail projects. He says the different segments typically involve two years of planning, design work and environmental and archeological investigations as part of the different projects. Countywide he noted they are working to update the wayfinding and signage system, some with maps and arrows, to more easily navigate trails on the ground. Sanderson says the projects are very partnership based and they are fortunate to have a number of key players working together to build out the trail system. He says people want to experience trails and demand has been consistently trending since the early 2000’s so they’re working to integrate existing bike lanes and pathways to visit different trails, scenic areas and different parkland. The Border-to-Border Trail (B2B) extension project is a partnership with Huron-Clinton Metroparks, the Washtenaw County Parks and Recreation Commission, Washtenaw County Road Commission, MDOT, the Huron Waterloo Pathways Initiative and the MDNR. Facebook photos. (JM)