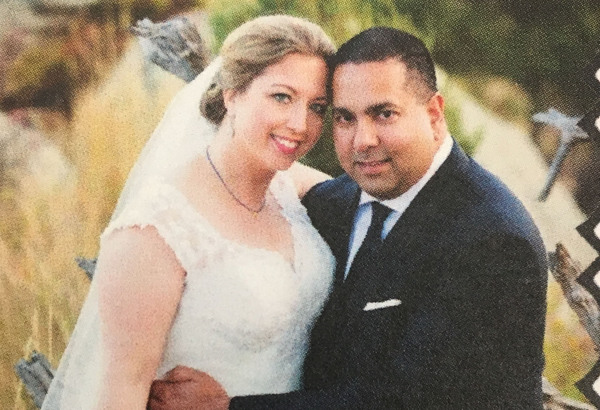 A woman who found someone else’s wedding album in a cabinet she just purchased is reaching out to the community to help find the owners of the album.

Tracy Banish of Milford found the small, gray wedding album in a gray hutch she purchased less than two weeks ago from the Walnut Street Marketplace & Howell Holiday Boutique in downtown Howell. Banish says the only identification is the couple’s first names listed in the book, Anthony and Kate, and their wedding date of October 6th, 2016. She guesses the couple is in their early 30s and believes the groom may be of an Indian culture, based on outfits worn by his side of the family in the pictures.

Banish found the album inside the hutch, in a pocket meant to hold wine bottles. She tells WHMI she has tried to trace the original owner of the hutch, but to no avail. Banish contacted the person she had bought the hutch from. That individual didn’t know whose album it was and said they had purchased the cabinet from a wholesaler in Ann Arbor. The brand-new Ethan Allen hutch had been returned to the wholesaler, though the person who had purchased it from the wholesaler wasn’t sure who it originally came from.

Banish says she posted pictures and information about the album on a handful of Facebook pages, as well as her own personal page. Her post has been shared over 500 times, leading to plenty of suggestions of how to identify the couple; one being through the photographer. Banish says unfortunately, there isn’t a name or watermark for a photographer in the pictures or album.

She is asking for the community’s help in locating Anthony and Kate, as she says if it were her, she would want it back. Tracy can be reached at tracy@mihometeam.com (DK)