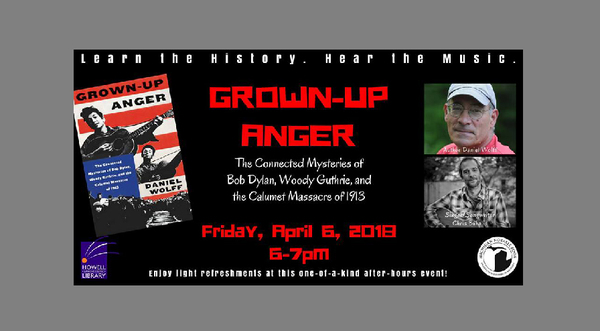 A Grammy-nominated author is coming to Howell to discuss his book on the connection between folk singers and an early 20th century Upper Peninsula tragedy.

The Howell Carnegie District Library will be hosting author Daniel Wolff as he holds conversation about his book, Grown-Up Anger: The Connected Mysteries of Bob Dylan, Woody Guthrie, and the Calumet Massacre of 1913. Wolff and singer-songwriter Chris Buhalis will take the audience on a journey to learn what binds the 3 together and hear the music inspired by it. Wolff, a rebellious teenager in the ‘60’s, connected with Bob Dylan’s music and involvement in the civil rights movement. Through Dylan’s work he discovered Woody Guthrie, whom Wolff said was fighting for a more open and liberal America than what he saw following World War II.

Intrigued by Guthrie’s song, 1913 Massacre, Wolff learned about the Calumet Massacre and begin to see through-lines connecting Dylan, Guthrie, and the mining town in the U-P. On Christmas Eve, 1913, striking copper miners wanting to unionize threw a party for their children. At some point following the gift giving and caroling, somebody ran into the second story room they were gathered in, falsely yelling “Fire.” The crowd panicked, and as they tried to escape down the stairway, 73 people, mostly children, were crushed and smothered, losing their lives. The event became legendary with people trying to organize unions.

Wolff believes one connection between the miners, Guthrie, and Dylan, is that they were all fighting for something they believed in. He says there are lessons to be learned from it, still, today. Wolff said the strike was to get recognition for a union. Guthrie fought for something he called one big union. Dylan was trying to organize and be part of the civil rights movement. The idea of people getting together to work for what they believe in is important, Wolff, says, and stays important, and has been stymied over and over again. Wolff’s hope is that if we know the history, we just might not do it again and again.

The event takes place on Friday, April 6th, from 6-7pm. Light refreshments will be available.

Wolff will also be a guest this Sunday morning at 8:30 on WHMI's Viewpoint program. (MK)