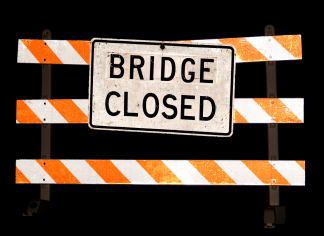 An aging bridge will be replaced this summer as part of a project that will impact different forms of traffic in the Milford area.

The Road Commission for Oakland County is replacing the bridge on Wixom Road over the Huron River. There are currently twin concrete culverts there, which will be replaced with a single span bridge. The project will start in July and last through late fall, likely toward the end of October. There are a lot of different aspects to the project and the Road Commission had to work closely with the Michigan Department of Natural Resources due to a number of different concerns related to fish, mussels and endangered bats that nest in trees in the area. Some tree removal work had to take place before the bats came to nest and another issue involves waiting until a trout release by the state in the river is complete.

Road Commission Spokesman Craig Bryson told WHMI they don’t want to disturb the fish when they’re being released or spawning but also the bats when they’re coming out of hibernation and finding trees to roost in. Once all of the preliminary work is done, construction will get underway in late July. Bryson says that’s when Wixom Road will be completely closed.

Unfortunately, he says there is no really good short alternative route in the area so there will be detours to deal with. The official detour will be Wixom Road to Glengary to Benstein to Bass Lake Road to Sleeth Road and vice versa. A temporary left turn traffic signal will also be installed at the intersection of Glengary and Bass Lake Roads. Bryson says they are also trying to accommodate recreational users of the waterway. The Huron River underneath the bridge will be closed Monday through Thursday but open on the weekends from Friday through Sunday. He says informational signs will be put up at popular boat launches so canoers and kayakers will know the river will be closed at the bridge during weekdays.

Bryson says the project qualified for state/local bridge program funding, which is only given out to bridges in great need of being repaired or replaced. He says the good news is that funded 95% of the cost and the Road Commission will pay the remaining 5%. The total cost is estimated around $2.4 (m) million. (JM)