Findings Issued Against Brennan; Kowalski To Get New Trial 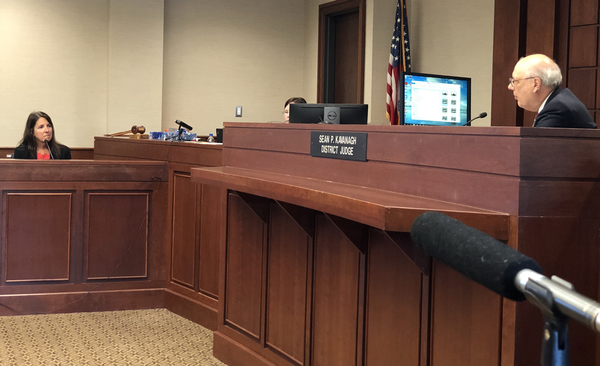 A much anticipated report has been issued by the judge who presided over the Michigan Judicial Tenure Commission hearing on a formal complaint filed against 53rd District Court Judge Theresa Brennan - which will likely result in a new trial for a man serving life in prison.

Retired Judge William Giovan was appointed special master to preside over the formal hearing and heard evidence in the case in October. He has issued his findings in a report to the Commission, which may be accessed through a link at WHMI.com. Brennan is accused of unethical acts that could lead to her removal from the bench. The Michigan Judicial Tenure Commission says Brennan used staff to perform personal services and failed to disclose a relationship with a police officer during a murder case. Former State Police Detective Sean Furlong was the chief prosecution witness in the 2013 murder trial of Jerome Kowalski, over which Brennan presided. Testimony and other evidence that came to light during Brennan’s divorce indicated the pair engaged in an affair before, during and after the trial. They have both denied that and said the affair began only after the trial was over.

Giovan’s report states “Perhaps the most serious charge proven against respondent Theresa Brennan is her failure to disqualify herself from the case of People v. Kowalski, Livingston County Case No. 08–17643-FC, because it was not only serious misconduct, but also one that infected the integrity of a serious criminal proceeding, a charge of double homicide first-degree murder that resulted in a sentence of life imprisonment without parole.” He cited multiple instances that were “more than sufficient” to have required Brennan’s disqualification. Giovan noted the “denial of disqualification was all the more egregious, however, because, by the time of the disqualification motion and for a significant period before, Judge Brennan had a romance with detective Furlong. Yes, a romance.”

Livingston County Prosecutor Bill Vailliencourt tells WHMI: "I have just reviewed the report of the Special Master, which was only released today. Based on that report, I have contacted Mr. Kowalski’s attorney to discuss the next steps to be taken to enter an appropriate court order vacating Mr. Kowalski’s convictions and granting him a new trial. At that time, I anticipate that future court dates will be set. We will once again present the evidence to a fair and impartial jury for them to make the determination of guilt or innocence."

Meanwhile in regard to Brennan's alleged mistreatment of attorneys, litigants, witnesses and employees; Giovan states Brennan’s persistent abuse and discourtesy constitute violations. As for accusations that Brennan knowingly lied about destroying evidence from a cell phone during a deposition in her divorce case, Giovan said “More likely than not, Judge Brennan’s attempts and eventual success in obliterating the data from the cell phone rendered her guilty of the felony described in MCL 750.483a(5)(a)”.

Now that Giovan's opinion has been issued, the Judicial Tenure Commission will review it and make a recommendation to the Michigan Supreme Court, which could result in Brennan’s removal from the bench.

Meanwhile this afternoon, State Senator Joe Hune, Senator- elect Lana Theis and state Rep. Hank Vaupel issued a letter to Valliencourt stating that Jerome Kowalski deserves a retrial in the wake of scandal-plagued Brennan’s unfair handling of Kowalski’s case. The letter to Valliencourt concludes, “We respectfully ask that you give Mr. Kowalski the fair and impartial trial that he deserves and which justice demands.” The press release was issued prior to Giovan's report. The letter is attached. When asked for an initial response, Vailliencourt had not yet received their letter and told WHMI it appeared to have been sent to the media first. His comments in regard to a new trial were based on the findings of Giovan's report. (JM)