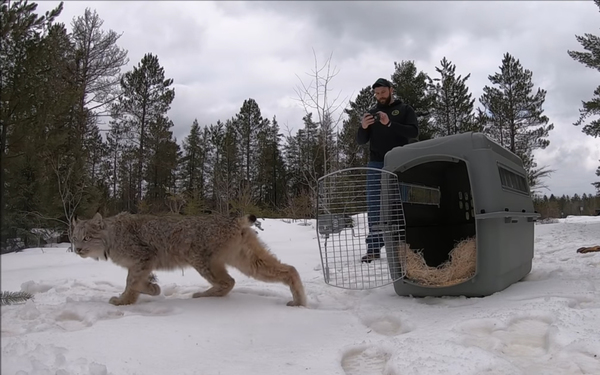 The first live lynx captured in Michigan in decades, and which spent time in Livingston County, has been returned to the wild.

The Michigan Department of Natural Resources announced Monday that the Canada lynx was set free last week in the Upper Peninsula. The lynx was trapped last month by a Sanilac County farmer after he had determined it was feeding on his domesticated geese. It was then taken to the Howell Nature Center's Wildlife Rehabilitation Clinic to evaluate its health.

After a short stay, the 18-pound female was transferred to the Detroit Zoological Society and treated for a foot wound, parasites and dehydration. Typically found in spruce-fir forests in Canada and Alaska, the Canada lynx is a threatened species in Michigan and according to Dan Kennedy, endangered species coordinator with the DNR, they are more likely to be seen in the Upper Peninsula, with the most recent verified sighting on Sugar Island in 2010.

After rehabilitating at the zoological society, the cat was taken by DNR wildlife biologists Cody Norton (pictured) and John DePue and released last Friday near a stand of pine trees in central Schoolcraft County. The location is said to have good habitat and abundant food sources, such as snowshoe hare and beaver. This location is also remote and has large contiguous blocks of public lands and little human development.

The DNR has the authority to handle federally threatened species through an agreement with the U.S. Fish and Wildlife Service. Screen grab courtesy of DNR. (JK)