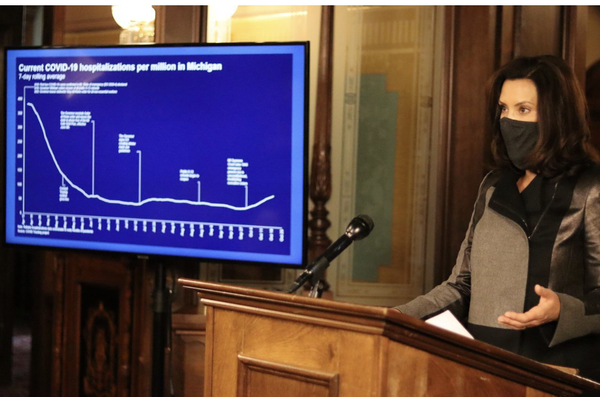 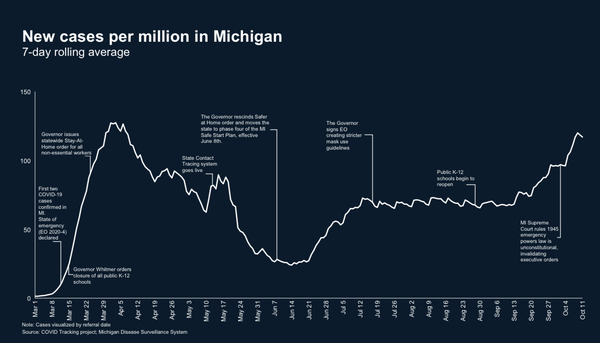 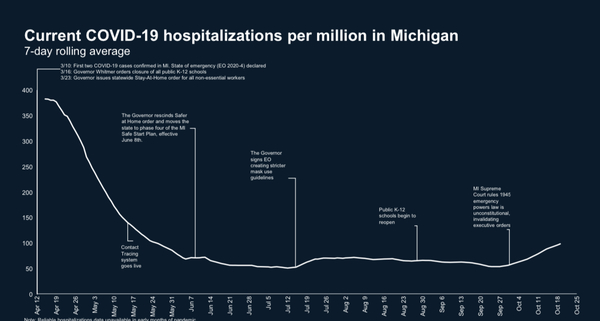 LANSING, Mich. (AP) — Gov. Gretchen Whitmer warned Wednesday that Michigan has more confirmed cases of the coronavirus than ever, noting a sharp increase since the state Supreme Court invalidated her sweeping orders earlier this month.

The number of COVID-19 cases had been gradually rising for months prior to the Oct. 2 ruling, from a seven-day average of 119 in June to roughly 984 — as the Democratic governor loosened economic restrictions and allowed schools to reopen. Since the court decision, the seven-day average is up to 1,818 — nearly double.

Virus-related hospitalizations, roughly 1,000, are double what they were a month ago but about a quarter of the April peak.

Whitmer pleaded with people to wear a mask and maintain distance from others.

“These numbers are moving in the wrong direction,” she said during a news conference in which she did not indicate whether another lockdown may be necessary. “We are in a dangerous moment where there’s the possibility of it just becoming community spread that becomes out of control. We’re seeing that in a lot of our neighboring states. That’s what we’re trying to avoid.”

Also Wednesday, a chiropractor in western Michigan challenged the state’s face covering rule, saying Whitmer’s health department has no authority to make it mandatory. It is one of the first lawsuits since the Whitmer administration issued new orders following the defeat at the high court.

The suit, filed in the Court of Claims, claims the health agency can regulate gatherings under state law but cannot order masks, which are widely promoted as a way to stop the spread of the coronavirus.

The lawsuit was filed on behalf of Semlow Peak Performance Chiropractic in Grand Haven. The Ottawa County health department told the clinic that it must follow the state order.

“We live in a representative republic and are not ruled by one person,” owner Kirk Semlow said. “My business is not a health threat to anyone, and we take appropriate precautions in providing our services to patients.”

Patients are told that masks are optional, though most wear them, attorney David Kallman said.

“It’s the principle of it,” Kallman said. “They just can’t take a statute, which gives a narrow scope of authority, and apply it in 15 other different ways. Go to the Legislature and get a law passed that says people need to wear masks.”

Spokeswoman Lynn Sutfin said the health department is confident that the order is lawful.

A coalition of major health, business, labor and university leaders on Wednesday backed the mask mandate, gathering limits and other orders issued by the health department and Michigan’s workplace safety agency in an open letter to elected officials in Lansing. Whitmer urged the Republican-led Legislature, which challenged her former executive orders in court after she extended a state of emergency without their input, to “recognize the science and the importance” of the restrictions.