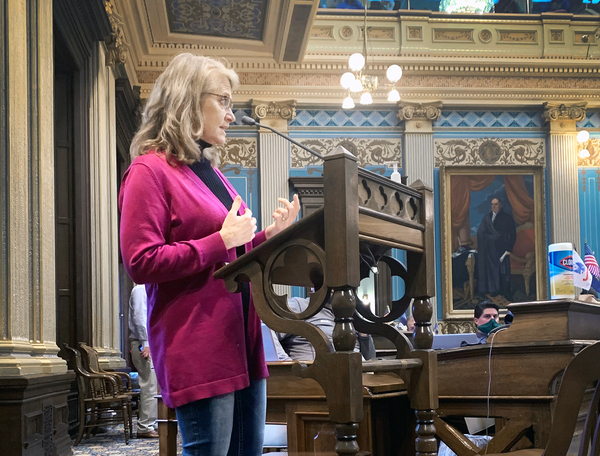 
The Republican-led Michigan Legislature has refused to extend the state’s coronavirus emergency declaration. It also voted Thursday to authorize a lawsuit challenging Democratic Gov. Gretchen Whitmer’s authority and actions to combat the pandemic, based on a resolution co-sponsored by Republican State Senator Lana Theis of Brighton Township.

Speaking on the Senate floor, Theis said the U.S. Constitution required a form of government that "understands the balance of powers between the executive, legislative and judicial...not a monarchy, not a dictatorship, not rule by executive, but a true separation of powers." She said the governor’s actions were a, “rejection of the democratic process as provided in both our state and federal constitutions” adding that the legislature had “voted to put into law protections that mirror the governor’s executive orders so that our health care workers, for example, may continue functioning beyond the emergency declaration.” She said it was “imperative we get back to the business of governing” and that “Michigan was never intended to be governed as a dictatorship or monarchy, and we must restore the balance of power.”

Unfazed, Whitmer issued new orders declaring states of emergency and disaster, meaning that a court fight is looming. The emergency is the basis for Whitmer's stay-at-home order, which she says has saved lives. “Today I signed new emergency and disaster declarations using independent sources of statutory authority to make sure our health care workers and first responders have the tools they need to save lives and protect Michiganders,” said Whitmer. “We’re all in this together. Defeating COVID-19 is an all hands on deck moment for our state, and I remain hopeful that Republicans in the legislature will stop the partisan games and start working with me to re-engage our economy safely and responsibly.”

The Legislature's steps came as hundreds of conservative activists returned to the Capitol to denounce Gov. Whitmer’s stay-at-home order. Outside the Capitol, speakers took turns addressing a crowd on the lawn. Meanwhile, drivers leaned on their horns as they traveled past, a repeat of what occurred April 15 but not close to the thousands who participated in vehicles at that time, which paralyzed traffic for miles. Protesters’ placards read, “Shut down the lockdown,” “No work no freedom,” and “Tyrants get the rope.” Some people wore the “Don’t Tread On Me” flag as a cape. Others chanted, “Lock her up,” in reference to the governor. Some wore President Donald Trump’s “Make America Great Again” hats or carried signs supporting him. Angry protesters, some carrying firearms and many without face coverings, entered the Capitol and demanded to be let into the House chamber, which was closed to the public to allow room for representatives and reporters to spread apart.

In response, Congresswoman Elissa Slotkin issued a statement Thursday night, condemning the nature of the protest. The 8th District Democrat said that while Americans have the right to protest, and even make what she called, “unfounded claims about the virus” and “carry signs with hateful slogans and swastikas”, brandish semi-automatic weapons inside the State Capitol and hurl insults, they did so, “at the expense of the health of the police, sergeant at arms officers, staff and elected leaders who they yelled at, at close range, without face masks.” She said while they have those rights, she and others, “also have the right to speak out against that behavior, saying she was “disappointed to see that many of those protesting (put) their own interests ahead of the health and safety of their fellow citizens.” Slotkin concluded that the decision to transition back to work and school should be based on science and facts and that “Angry slogans and threatening signs won’t get us there any faster.” The coronavirus has infected more than 41,000 Michigan residents and contributed to the deaths of nearly 3,800.