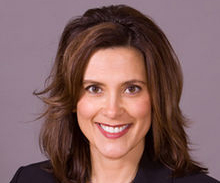 The Livingston County Democratic Party will host its annual dinner next month featuring the woman hoping to become Michigan’s next governor.

Gretchen Whitmer, who is running for the Democratic gubernatorial nomination, will be the key note speaker at the 35th annual Winans Dinner. It will be held Friday, May 18th, at the Lakelands Golf and Country Club in Hamburg Township. Whitmer is the former Senate Democratic leader and is one of four announced Democrats seeking the nomination. Also appearing will be 8th District Democratic candidates Chris Smith and Elissa Slotkin. Tickets start at $70 each.

The dinner is named in honor of Edwin B. Winans, who lived in Hamburg Township and was governor of Michigan from 1891 to 1893. (JK)