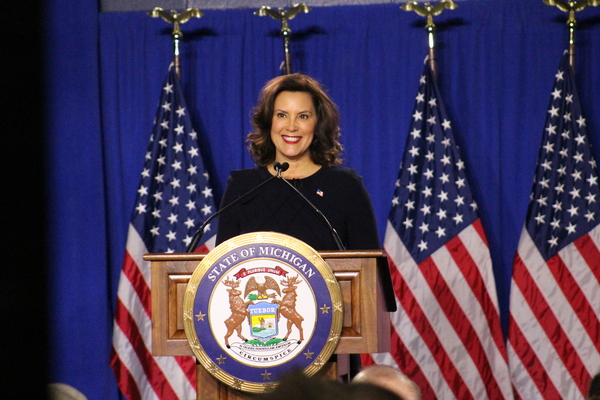 Whitmer, speaking at East Lansing High School where her daughters attend, highlighted work Democratic governors across the country are doing to improve access to health care. “Instead of looking after people with pre-existing conditions, the president is asking the courts to rip those life-saving protections away, and every other benefit Americans have under the Affordable Care Act. It’s pretty simple. Democrats are trying to make your health care better. Republicans in Washington are trying to take it away.”

Whitmer also highlighted her decision to ask the State Transportation Commission to issue $3.5 billion in state road bonds to fix the state's crumbling road system after the GOP-led legislature rejected her 45 cent gas tax proposal last year. “During my campaign, people told me to fix the damn roads, because blown tires and broken windshields are downright dangerous. And car repairs take money from rent, child care, or groceries. And we, the Democrats, are doing something about it.”

In response to the address, Meghan Reckling, Chair of the Livingston County Republican Party, issued a statement with a different take on the evening. “Tonight, Americans heard from the President about how in three short years he has improved our economy, strengthened our military, and tackled issues past Presidents could not or would not address. Through constant attacks by liberals, President Trump has remained focused on delivering historic results for all Americans. In contrast, Governor Whitmer’s Democratic response to the State of Union fell flat. Americans unfamiliar with her weak leadership and disregard for the legislative process may be fooled, but Michiganders are not. The Governor spoke about what Democrats have to offer, but days ago she went-it-alone, offering a short-term solution to “fix the damn roads” by straddling the next generation of Michiganders with $3.5 billion of debt. Whitmer has modeled herself after the do-nothing liberal Democrats in Washington. President Trump’s leadership has led to historic low unemployment, a booming economy, and a safer and stronger America. The President set the stage for an even brighter future. He reminded Americans why they voted for him in 2016 and why they will vote for him again in November."

Unsurprisingly, Dan Luria, the Vice-Chair for Strategy for the Livingston County Democrats, saw it differently, saying the President, "grandiosely represented a few modest gains as the successful reversal of decades of American decline. He touted a grossly unfair $2-trillion tax cut as having ignited the American economy, when it fact it lifted economic growth only briefly in 2018, since which time business investment has actually declined. Forty-eight days after being impeached for trying to bribe a foreign government to investigate a political rival, he spoke of America being respected again...Make no mistake: America is in mortal danger. A president who lost the popular vote by nearly three million has, as he boasted, filled more than a quarter of the judiciary with hard-right judges who oppose the Constitutional separation of church and state, the right of workers to join unions and negotiate for safer and better-paid jobs, women’s right to make their own medical decisions, and the legitimacy of Congress’s attempts to enforce the Constitution’s explicit prohibition against enlisting foreign nations in domestic political contests. Even though the economy is in reasonably good shape for many, though by no means all, Americans, the true State of the Union is badly divided, and the country ill-served by a president whose political support is predicated almost entirely on exploiting our divisions."

The full responses from Reckling and Luria are posted below.

Democrats' decision to pick Whitmer shows that they are focusing on the Midwest, where Trump won surprising victories in 2016 that helped carry him to the White House. It also represents an attempt to appeal to women, some of who have been alienated by Trump's conservative stances on issues like abortion and whom Democrats are trying to win over.

Governor Whitmer ended her response by urging the American people to stay focused on what their leaders are doing for them, not just what they say. “Remember, listen to what people say, but watch what they do. It’s time for action. Generations of Americans are counting on us. Let’s not let them down.” (JK)