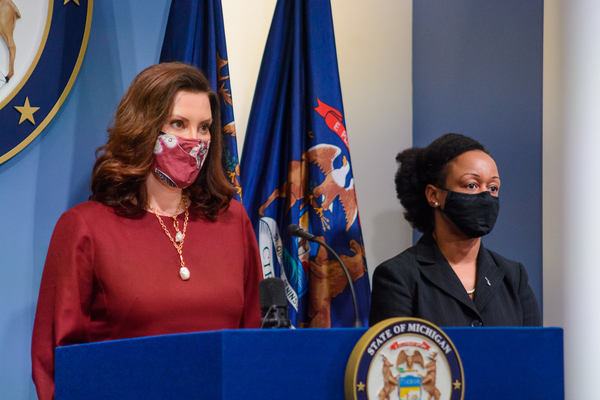 Whitmer spoke during a press conference held Tuesday afternoon, which coincided with Senate Republicans’ release of a $2.2 (B) billion coronavirus relief plan - less than half of what the Democratic governor proposed. Six weeks after Congress and then-President Donald Trump enacted the most recent round of funding, the GOP-led Legislature and governor have not agreed to disburse the aid — for vaccine distribution and virus testing, K-12 schools, businesses, emergency rental assistance and other priorities.

Whitmer said they need to build on progress made and encouraged the Legislature to join forces with her to pass the MI COVID Recovery Plan to help local communities, school districts, businesses, and vaccine distribution efforts. She commented the funds were sent to Michigan from the federal government; it was a bi-partisan group of the congressional delegation and signed by then-president Donald Trump to send this relief to states across the country. Whitmer said other states are deploying these resources to support children, help struggling businesses and roll out vaccine distribution but Michigan is sitting on them because they’re waiting for the legislature to appropriate the dollars. The legislature has so much ability to be a partner and oversee how the dollars are spent, which is articulated largely by the federal government so it’s not about her but trying to meet the needs of the 10 million people of Michigan.

The Governor also touched on vaccination efforts and progress being made to safely return schools to in-person instruction by March 1st.

Michigan Department of Health and Human Services Chief Medical Executive Dr. Joneigh Khaldun provided an update about continued efforts to slow the spread of the virus. She said case rates have steadily declined and are down 81% from the mid-November peak. While numbers continue to trend overall in the right direction, Khaldun said she’s very concerned about what they’re seeing with the new variant – noting 45 cases have been identified across ten counties and there will be more. She said the variant is likely in the general community and if not vigilant, there could be another rise in cases and hospitalizations.

A link to the full PowerPoint presentation from Tuesday’s press conference is provided.