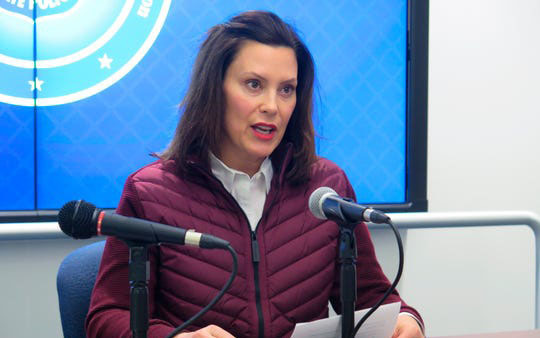 LANSING, Mich. (AP) — Michigan Gov. Gretchen Whitmer said Thursday that, effective Monday, all of the state’s public and private schools will closed for three weeks through April 5 to combat the spread of a rising number of coronavirus cases.

The announcement during a late-night news conference came as officials said 10 more COVID-19 cases had been discovered in Michigan, raising the tally to 12. Already, some K-12 schools had announced weekslong closures and others had begun training staff to potentially move to online learning only.

“This we feel is a necessary step to protect kids and teachers and families and our overall public health,” said Whitmer, adding that school employees should continue to be paid. “I know this will be a tough time for our parents and educators, and I urge businesses to do everything that they can to support employees at this time.”

Officials said all the new cases are are adults — three in Kent County, where Grand Rapids is located; two in Oakland County just north of Detroit; two from Washtenaw County, home to Ann Arbor; and one each from Ingham County — which includes Lansing — St. Clair County northeast of Detroit and Montcalm County northeast of Grand Rapids. All but one had traveled internationally or domestically, including one on a cruise.


Illinois Gov. J.B. Pritzker asked state’s major sports team owners to cancel games or play without fans until May 1 to help stop the spread of the coronavirus. Michigan Gov. Gretchen Whitmer said schools in her state will close until April 6th. (March 13)
“I expect us to find more cases of this disease, and I expect there to be community spread,” said Dr. Joneigh Khaldun, the state’s chief medical executive and chief deputy health director. “While we do not need to panic, this is very serious and everyone needs to do their part to prevent the spread of this disease.”

Earlier Thursday, the Michigan Legislature approved spending up to $25 million to combat the virus that is now a global pandemic. The supplemental budget bill, which Whitmer will sign, will allocate $10 million to state agencies for preparedness and response to COVID-19.

Meanwhile, the Michigan High School Athletic Association suspended winter sports tournaments indefinitely. The state Capitol suspended tours and events through May 1. Whitmer earlier this week recommended the cancellation or postponement of events with more than 100 people in a shared space.

“This is a true and real public health crisis at the time, and we need to do what we can to help slow and mitigate the spread of this virus,” said Mark Uyl, executive director of the athletic association.

The state funding may cover monitoring, lab testing, contact tracing and infection control. An additional $15 million will be set aside in a coronavirus response fund and can be appropriated later. The legislation also will authorize the the state to spend up to $50 million in federal coronavirus funding.

The state Department of Health and Human Services said it can test about 1,300 people, up from 300 last week. The state had approved 135 tests as of Thursday, of which 120 were negative and 12 were positive.

Khaldun said the state lab had enough test kits and it was “most promising” that private labs had started doing COVID-19 testing.

“I am telling my clinicians, ‘Do not hold back if you think is it appropriate for someone to be tested,’” she said. “As we are continuing to test appropriately, as we we start finding more cases, there’s a possibility that we will run out of tests. It’s incredibly important that the federal government keeps up with that demand.”

Khaldun said, however, that she was concerned over the U.S. government’s ability to keep pace with the demand.

For most people, the new coronavirus causes only mild or moderate symptoms, such as fever and cough. For some, especially older adults and people with existing health problems, it can cause more severe illness, including pneumonia. The vast majority of people recover.

Whitmer urged people to “do your part” and “make smart choices” because those who feel healthy and show no symptoms may unknowingly be carrying and spreading the virus. Her order will affect all school buildings, including those with any day care centers, but not child care facilities elsewhere.

Leaders of the Michigan Senate said they will curtail how often it meets, while both the Senate and the House will allow staff over age 60 or with underlying health conditions to work from home. Legislators also began introducing coronavirus bills, including to remove cost barriers to testing and treatment and to strengthen a law that restricts businesses from price-gouging essential items during emergencies, such as the one Whitmer declared this week.

“We need to make sure that people don’t profit off of human misery,” said Sen. Jeremy Moss, a Southfield Democrat.

All of Michigan’s 15 public universities are shifting to online classes or other methods for a few weeks or longer.

The Detroit Symphony Orchestra canceled four days of performances of Carl Orff’s “Carmina Burana.” But its online video archive will be available for free, starting Friday, at dso.org/live “so that we can continue to share the gift of music,” president Anne Parsons said.