Whitmer: No Decision Yet On Re-Opening Of Gyms, Theaters 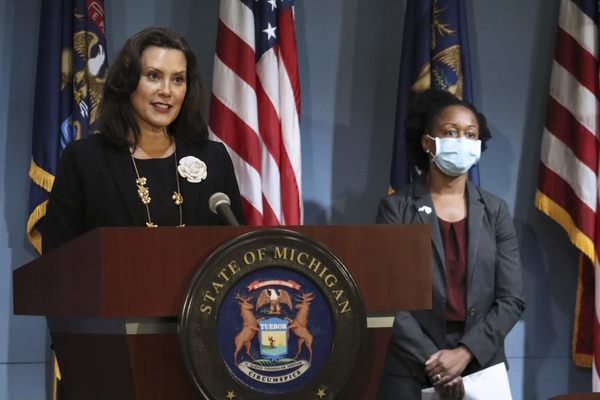 
Governor Gretchen Whitmer says she won’t be "bullied" when it comes to re-opening some Michigan businesses that have been closed for months.

The Governor held a press conference Tuesday afternoon and some had been anticipating a possible announcement related to when gyms, theaters, bowling alleys and other Michigan businesses might be re-opening. Whitmer acknowledged that there has been a lot of pressure on business owners, decision makers and public health officials but stressed she would continue to make decisions based on facts and data and recommendations from health experts. The Governor commented that because they took aggressive action early on to fight COVID-19, Michigan is faring a lot better than other states. She said the economy is operating at 87% of where it was in early March but cautioned they know all success is precarious and numbers can move really quickly in other directions – which is why watching 7-day averages is really important.

Whitmer said the re-opening of the various businesses is something they’re continuing to scrutinize and determine if it is safe to move forward but it’s still too early to say. Whitmer said they’re assessing if there are sufficient protocols for businesses that have not yet been engaged to see if they can start to re-engage at some level on those fronts. The Governor said she “will not be bullied into making that decision” but will follow science and work with MDHHS Chief Medical Executive Dr. Joneigh Khaldun. Whitmer said she is looking very closely at those businesses that have been closed for the duration to determine if the protocols are there and if the seven day averages and the number of positive cases per-million, per-day would support doing a little more.

There has been mounting pressure from businesses like gyms and theaters to re-open, since those in Northern Michigan have been allowed to operate since June 10th. Some gym owners have defied the orders and re-open anyway, including one locally. A number of Chambers of Commerce and business coalitions have also urged Whitmer to re-open the business that remain closed; alleging that if the restaurant industry, casinos and others have found ways to safely operate – then the others can too.