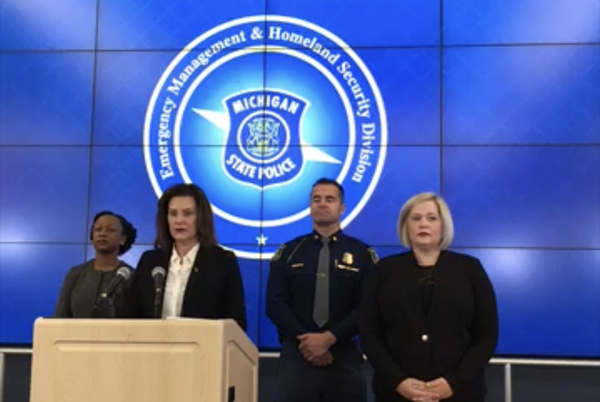 
Michigan Gov. Gretchen Whitmer has issued a sweeping order banning dine-in customers at restaurants and closing all bars, movie theaters, gyms and other sports facilities to curb the spread of the coronavirus. The order will take effect at 3 p.m. Monday and last through March. Businesses can still offer food and beverages for pickup, delivery and via a drive-through service.

The state health department reported 20 new cases of COVID-19 on Sunday, bringing the Michigan total to 53. Included in the new positive tests is a “younger person,” she said. While there are still no confirmed cases in Livingston County, local health officials expect that to change.

Whitmer, who has prohibited gatherings of more than 250 people, said she saw “incredibly disturbing” photos on social media of patrons cramming into establishments and not observing social distancing. “Certainly at the local level there are some decisions being made, but I think you’ll see some at the state level in short order,” Whitmer said when she was asked about bar and restaurant closures.

Whitmer also signed an executive order Sunday in an attempt to curb excessive price increases of emergency supplies and food during the coronavirus outbreak. That measure, which takes effect today, restricts a person or business from reselling goods or products that are “grossly in excess of the purchase price of the product.” Also, a business or individuals can’t sell a product at more than 20% higher than the purchase price unless the increase is “due to bringing the product to market.” A violation would be a misdemeanor. The restrictions are in place through April 13. The Michigan attorney general’s office said it received more than 75 complaints of price-gouging.

For most people, the virus causes only mild or moderate symptoms, such as fever and cough. For some, especially older adults and people with existing health problems, it can cause more severe illness, including pneumonia. People with mild illness recover in about two weeks.

Measures like closing the schools and limiting public gatherings are meant to try and slow the spread of the disease, which Dr. Don Lawrenchuk, the Medical Director for Livingston County, says is necessary as no one has immunity from the COVID-19 virus, unlike influenza. "Typically influenza season runs from October until April every year, and everyone isn't sick all at once, but if everyone did get sick at one time, that would very quickly overrun whatever health care systems that are out there. So what this is attempting to do through social distancing and other mitigation efforts, is to suppress the number of people who are sick at any one time to allow the very sick people to receive the care that they need."

The Detroit Free Press reports that in Michigan, the data suggest as many as 147,000 people could have severe or critical symptoms that require hospitalization in a widespread coronavirus outbreak. Of them, as many as 33,700 are people ages 60 and older, who are especially vulnerable for having severe coronavirus symptoms. However, the state only has roughly 25,000 hospital beds and about 9,000 of those are available on an average day, according to the analysis.

Meanwhile, Kroger announced they are temporarily adjusting daily store hours at all Michigan stores and looking to fill 400-500 positions across the state. And they have immediate job openings. Walmart is also cutting store hours starting Sunday at its locations across the U.S. due to COVID-19. Stores normally open 24 hours will be open from 6 a.m. to 11 p.m. until further notice, the company said late Saturday. Other stores, which are typically open until midnight, will also have reduced hours.

Dr. Joneigh Khaldun, the state's chief medical executive, said the new cases have increased as Michigan continues to struggle with a shortage of supplies to test people for the coronavirus. The state currently only has enough testing materials to test 115 people for COVID-19. However, the Michigan Department of Health and Human Services has said that four commercial laboratories would start testing in the state to increase the number of people who can be tested.

The Michigan Supreme Court also announced emergency steps Sunday, including allowing trial courts to reduce the number of cases to limit crowds in lobbies and corridors and encouraging the use of technology for remote participation. The measures will be in effect until April 3.

In Ingham County, home to Lansing, officials announced Sunday that they were cutting legal occupancy by 50% at restaurants, bars, schools and other food service establishments starting Monday — after the state’s second largest county, Oakland in the Detroit suburbs, did so a day earlier.