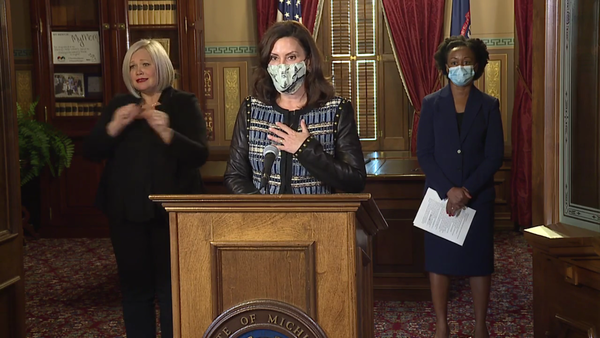 
Governor Gretchen Whitmer is calling on the legislature to take action and pass laws requiring masks in indoor places and crowded outdoor spaces.

Whitmer spoke during a press conference Thursday, saying numbers are climbing and COVID-19 cases have been on a dramatic rise since a Supreme Court ruling limited her powers to issue orders during the pandemic. She again highlighted the need for people to take action and safety precautions to slow the spread of the virus– again stressing the importance of wearing masks. The Governor is pushing for the Legislature to codify existing mask orders. Whitmer said she felt bi-partisan support would improve mask compliance and send a positive message, noting all of the political rhetoric has created a lot of confusion and unnecessary suspicion about the efficacy of masks. The Governor commented that everyone is tired but ignoring the problem is making it worse. She said codification won’t change the fact that it is the law but it would reinforce that everyone is in this together.

Chief Medical Executive Dr. Joneigh Khaldun said the state is not yet seeing the number of hospitalizations that occurred in the spring but cautioned they are rapidly rising. She said they’re working very closely with hospital systems to understand their surge capacity plans and what they need to do to take care of both COVID and non-COVID patients. Khaldun said as has been the case throughout the pandemic, as hospitalizations go up - they expect deaths to follow within a few weeks. Khaldun said there are models that estimate at the rate things are going, if nothing else is done and people don’t change behaviors, there could be as many as 100 deaths per day by the end of December. She said Michigan is really at a tipping point right now when it comes to COVID-19. Khaldun said rates are rising exponentially and there is general community spread. She noted the cases they’re seeing are not just associated with outbreaks, saying as many as 50% of the positive cases they investigate have no idea how they got the virus.

Khaldun commented that local health departments are currently investigating over 590 outbreaks across the state - the largest number since the state began tracking outbreaks. Those have been tied to long-term care facilities, schools, healthcare and social gatherings. Khaldun said the outbreaks are connected to birthdays, weddings, recreational facilities, a high school sleepover, a high school banquet. She said there have been multiple outbreaks associated with funerals, K-12 and college sports teams while others are impacting workplaces such as office buildings, assembly plants, manufacturing facilities and a grocery store.

Meanwhile, Whitmer also announced that MIOSHA will be increasing scrutiny on remote work policies established by businesses, primarily offices. She further called on the federal government to work with the president in a bi-partisan manner to craft a new federal aid package.