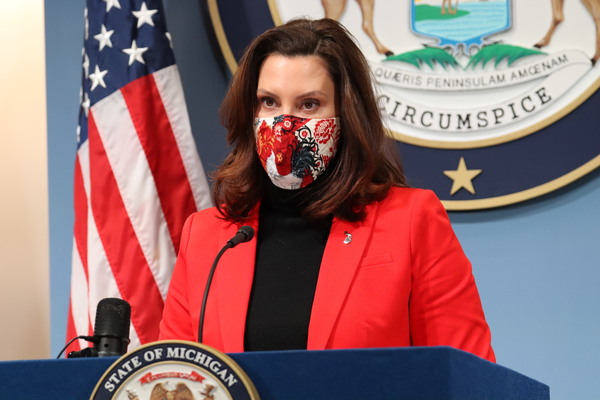 At a press conference Wednesday, the Governor continued to urge bi-partisanship to pass a plan and her fiscal year 2022 budget recommendation so the state can ramp-up vaccination efforts and provide needed relief. The full $5.6 (B) billion package of federal funding is being held up by the Legislature, which has been at odds with Whitmer over various actions taken to combat COVID-19. House Republicans passed a $3.5 billion plan that would provide assistance to families, schools and small businesses, but withheld school funding until Whitmer and the Michigan Department of Health and Human Services gives up its authority to close schools over COVID-19.

Whitmer said they need to negotiate details and deploy those resources and that, in tandem, she and the Legislature need to come together and find common ground on the 2022 budget. Whitmer commented that some members want to indulge in conspiracy theories or hurl insults but she remains ready to work together to deliver for the people of Michigan and her judgment “won’t get clouded by that noise.”

Whitmer was referencing recent statements by Senate Majority Leader Mike Shirkey, in which the Clarklake Republican claimed, in contradiction of the evidence, that the Jan. 6 insurrection at the U.S. Capitol was staged and that dead people voted in the Nov. 3 election.

Whitmer said she’s calling on Republican leaders in the Legislature to work with her in a civil way to give "families, businesses, schools and communities the resources they need to survive and succeed." She said she hopes to get things moving and stressed a need for partnership to focus on a pathway out of the pandemic. However, a partnership does not appear to currently be in the works. Midland Republican Jim Stamas, who chairs the Senate Appropriations Committee, told the Detroit News that discussions on relief dollars are taking place between the Senate and House and that the Legislature has a "substantially" different plan than Whitmer.

Whitmer noted the state is making headway with vaccination goals and Michigan ranks 9th nationwide for total vaccines administered. However, she cautioned that success is always fragile and they’re now in a race against variants or mutations of COVID-19.

Michigan Department of Health and Human Services (MDHHS) Chief Medical Executive Dr. Joneigh Khaldun provided an update regarding continued efforts to slow the spread of the virus and ramp up vaccinations throughout the state. She said case rates continue to decline and the number of active outbreaks being investigated by local health departments is down 7% from the previous week. Khaldun said the trends are encouraging and they’re pleased with the progress of vaccinations but are also working to try and slow the spread of the new COVID variant.

Also during the press conference, the Governor announced the new report released by the Michigan Poverty Task Force that outlines new initiatives, expanded state policies and a significant financial investment.