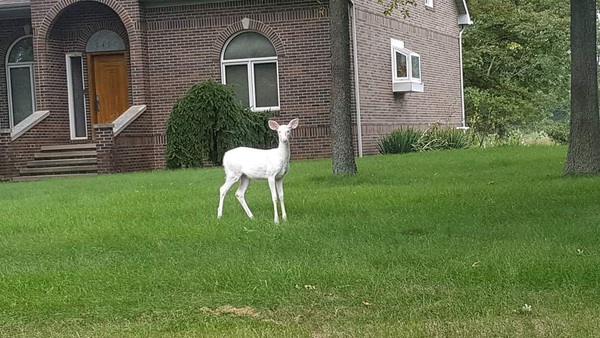 A white deer has been attracting attention in Kensington Metropark.

Huron-Clinton Metroparks Authority staff as well as other visitors have reported the seeing the deer on multiple occasions. Metropark Deputy Director Dave Kirback told The Detroit Free Press the deer was born last year and they’re pretty sure she’s a doe. Although a little small, he says she made it through the winter just fine. He said the unusual deer has a sheer white coat, a pink nose and blue-ish eyes. That suggests the deer is not an actual albino but has a genetic variation. Kensington Metropark is located in the Milford and Brighton Township area. Kirback says the white deer is typically seen in early morning, grazing on the park’s east side near the entrance to the golf course. A Brighton couple spotted the deer last weekend and filmed a video, which was posted online.

Albino, all-white and piebald deer are not protected species in Michigan. The Department of Natural Resources says it’s a recessive trait often associated with birth defects, weakness and poor eyesight. A link to a past social media post by the DNR is provided, which offered clarification about the legality of hunting such deer after an albino buck was legally shot and killed by a 14-year-old Hartland Township boy. Photo from video posted by Mick McDonald. (JM)