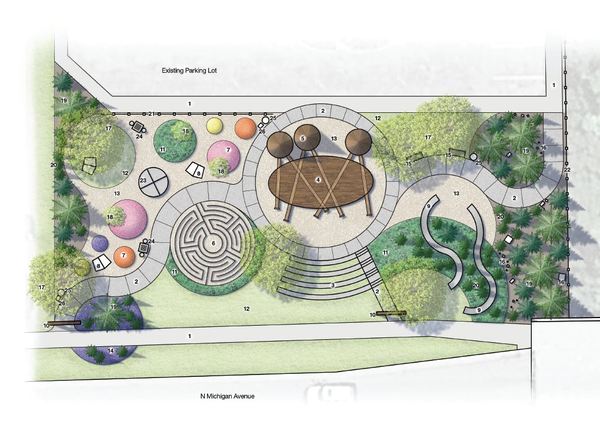 
A grant-funded project will bring a new whimsical park element to downtown Howell.

Conceptual designs were presented during a recent virtual Howell City Council meeting and the project is designed to provide a charming spot for people of all ages to gather and enjoy the beauty and of Howell. City staff has been working with Allie Pearson of Grissim Metz and Associates (GMA) on the conceptual design of the Kaboom Grant / Thai Summit funded public gathering project. It would be located behind the Depot Lot and Michigan Avenue.

Pearson told Council she felt the plans captured what the City is looking for. The site will feature passive areas, as then more engaging areas. Initial ideas were whimsical fairy gardens, hobbit houses and space for an amphitheater and performance area with a wooden stage. The amphitheater seating will be incorporated into a hillside area, along with some potential slides. Game tables are proposed including four-way ping-pong and concrete chess tables with fun horse pieces for the stands. To add to the whimsical piece of the site, Pearson said they’re looking at different bird houses, some gateway features and creative fencing to add to the overall vibe of the project. Pearson said they’re looking at incorporating some kind of maze or labyrinth to the site, as well additional fun seating and shelter areas. As for landscaping, Pearson said they’re looking to bring in fun whimsical plant materials such as weeping spruce trees and will incorporate the idea of hobbits or genomes and bring in some color with mass planting of flowers on mounds.

There will be different access points and hand sanitizing stations scatted through the site. Some concerns were raised about kids playing and traffic on Michigan Avenue and it was determined some type of low fence would be a good solution. There will also be plantings along the hillside to discourage children from coming up the hill.

Interim City Manager Erv Suida commented it’s a nice project to lift spirits during this time of doom and gloom and hopefully one day create a space where everyone can gather and have some fun again. He noted that Thai Summit is a big contributor and something of this magnitude couldn’t have happened without them, adding Thai Summit is equally excited about the project going forward. Council gave consensus to the plans moving forward and naming ideas for the unique space are still being bounced around. The goal is to get the project going this summer and be completed by November.