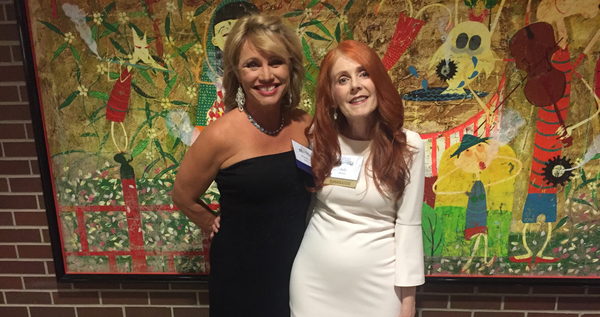 A Brighton woman was honored for her volunteerism in helping victims of trauma with an award recognizing the power of giving.

Wendy Jo Morrison (left) is one of 38 winners of the 2018 Governor’s Service Award, which she was presented with at a ceremony Tuesday held at the Wharton Center in East Lansing. Morrison was specifically named “Volunteer of the Year”, acknowledging her work in healing trauma victims.

Morrison founded UBU Today; a nonprofit organization that uses natural methods of healing, like Biodynamic Breath and Trauma Release. Morrison discovered the method while in Greece and is the only person in the United States with a certification in the practice. She was prompted to explore options in healing as a trauma victim herself. Morrison was kidnapped in 1993 and assaulted for hours before escaping. She tells WHMI that experience is what encouraged her to help others.

Morrison says she waited 20 years before finding a modality to heal the residual trauma from the incident, which contributed to her being diagnosed with a terminal brain disease called Multiple System Atrophy, or MSA, in 2010. She says the autoimmune disease can be caused by extended exposure to stress and unresolved trauma, and cannot be treated with traditional medicine, leading to the creation of UBU Today.

Morrison says she is “extremely humbled” to receive the Governor’s Service Award and that she never imagined she’d be honored for the work she was called to do to save her own life. She was nominated for the governor’s award by UBU Project Director, Julie Melody (right), who says she’s amazed at Morrison’s vision, authenticity of her work and her ability to change lives. Melody says, “Wendy is responsible for all of that and so she is well-deserving of this award.”

More information about UBU Today can be found at the link below. (DK)