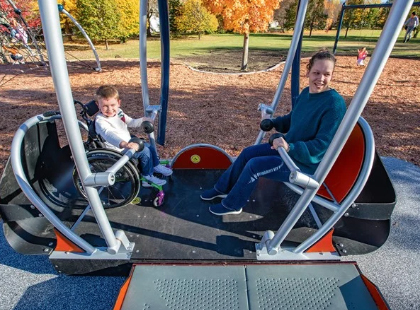 
South Lyon’s McHattie Park is becoming more inclusive with the addition of an accessible swing for individuals of all abilities.

City Council earlier approved the purchase of the We-Go-Swing for $51,252, which included installation that began in late October. The South Lyon Herald reported that some concerns were raised about the cost and use of a crowdfunding site was suggested. About $3,600 was ultimately raised through donations and the remainder of the cost for the swing came from the park fund.

The Parks & Recreation Commission said work began years ago to bring a wheelchair swing to the park. Councilwoman Maggie Kurtzweil was quoted as calling the equipment priceless, saying "there is no price that can be put on the heart of a mother that has a disabled child and watches every other normal kid swing on a swing, except her own”.

The swing will be maintained by City's Department of Works.