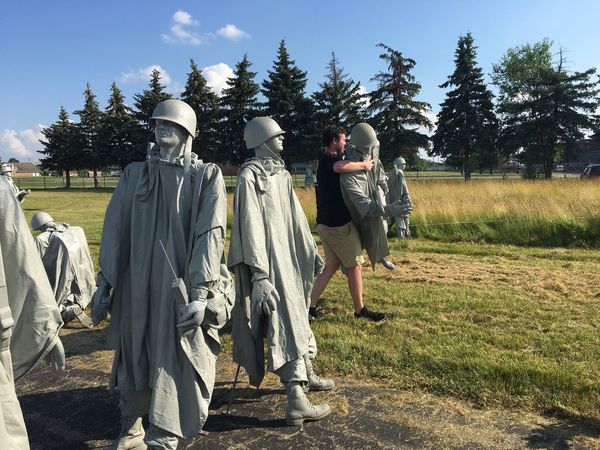 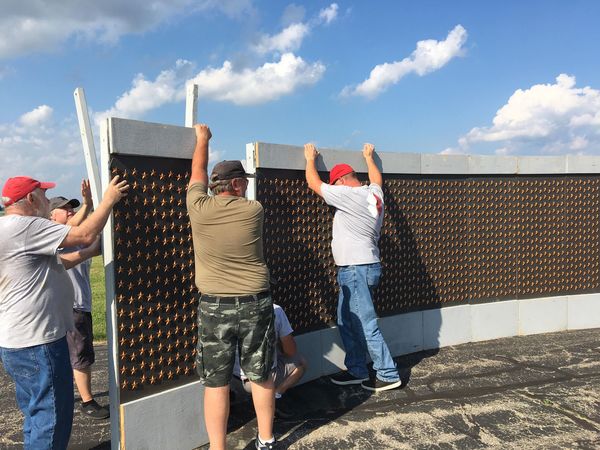 Community members can now view a war memorial display at the Livingston County Airport that is centered on the stories of those that have served and those that did not return home.

The “Freedom is Never Free” traveling memorials were escorted to the airport in Howell Township through a convoy that arrived Wednesday afternoon after beginning its journey in Dundee. Volunteers went to work immediately after, setting up the memorials that are now open for viewing through Sunday. The display is being presented by the Connect Five Veterans Foundation, with the support of the Disabled American Veteran Chapter 125 and Auxiliary Unit 125.

An opening ceremony will be held this evening beginning at 7pm. The event begins with a presentation from the Livingston County Sheriff’s Office Honor Guard, followed by the placement of wreaths along the WWII Memorial. Connect Five Director Dale Brewer tells WHMI the ceremony will feature four stories told by veterans from each major conflict. One of the stories comes from an area veteran of the Korean War who was hit with shrapnel. He will bring the helmet he was wearing when he was hit.

There will be four memorials on display over the next several days. Brewer says the focus piece is a 50% replica of the World War II Memorial in Washington D.C. The memorial’s wall features 4,038 stars, each of which represents 100 veterans that didn’t come home. The display includes the Pacific and Atlantic pillars, as well as stanchions representing the states as they came into the Union. It will take up almost 400 feet, making it around the length of a football field in its complete form.

The Korean War Memorial that will be displayed consists of 23 life-size statues that will be set up in the same general formation as the memorial in Washington D.C. Returning to the airport this year is the the Michigan Vietnam Traveling Wall, which honors Michigan veterans that did not return home.

Also featured is The Eyes of Freedom Traveling Memorial from the Iraq War. It is in remembrance of Lima Company 325 out of Lima, Ohio. 23 members of the Marine Unit were killed in two IED explosions. The unit’s two surviving members and the families of the 23 brothers lost created the memorial, which consists of life-size oil paintings of the members that were killed. Included in the display are the boots worn by the service members in Iraq, their dog tags, and letters they sent home. One of the unit's surviving members will be present to share his story.

Also on display over the next several days are portions of the War Birds of Glory B-25 aircraft and a traveling museum with artifacts from WWI up to current day conflicts. Brewer encourages community members to visit the display, adding that it is not only educational, but healing as well. The display is free and open to the public 24 hours a day through the weekend. (DK)