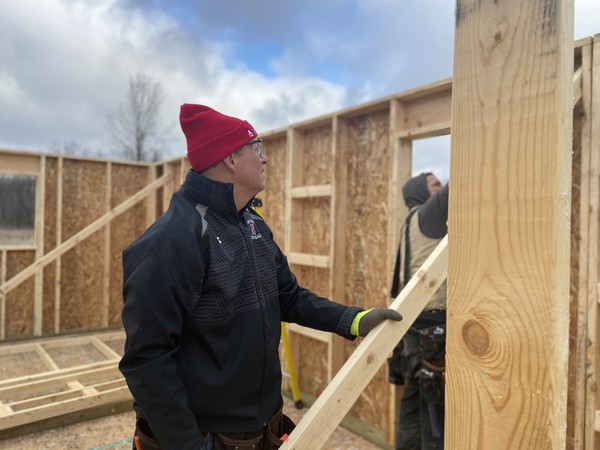 Habitat for Humanity is seeking volunteers for its current partner family home build.

The local non-profit works to transform lives by building, affordable quality homes with families in need. The qualifying process to being chosen as the recipient of a Habitat for Humanity home requires 250 sweat equity hours per adult to show their commitment and to act as a down payment. The beneficiaries are then sold the home at a qualified mortgage that’s affordable for them, with Habitat for Humanity acting as the lender so they can set the mortgage to what the recipients can afford.

Resource Development Director Ryan Skomial says they need helping hands for their current build, as well as another starting this spring. She says they currently have a partner build going on in Byron for a single mother from Fowlerville - who Skomial says is an amazing woman. She says they just raised the walls at the build site so from here on out is a lot of volunteer work. Recently, 30 dedicated volunteers braved 30-degree weather for nearly eight hours to get the exterior and interior walls installed at their current partner family home. Skomial says most of their homes, with the exception of some contracted out work, are entirely volunteer builds. She says they have a new construction director who is on site all the time to lead the projects and volunteers so they need as many hands as they can get. Then come spring, Skomial says they’ll also be breaking ground on a second home off Oak Grove Road in Howell Township for a mother and her family. She says that woman came to them through a critical home repair and after being out there, they were able to work with her on some of her finances and budgeting and got her in a good position to qualify as a partner family through Habitat for Humanity.

Skomial says they’re trying to get the current Byron build done as close to April/May as soon as they can because then the woman can start the official mortgage process through Habitat. Once that happens, Skomial says she can officially close on her home and move in, which is really exciting. She says they only have a staff of four and trying to build houses with four people is a lot of work - which is why volunteers are so important.

Skomial tells WHMI It’s a new year and the local non-profit has a first-time goal of constructing two homes in this fiscal year but volunteers are needed to help make it all happen and as many helping hands they can get, the better. Skomial says if people have skills then that’s great but no experience or skills are required, which is why they have their construction director on site, who can lead volunteers and teach them skills for the day. She added it’s great if people do have skills because then they can help lead others but nothing is required. Licensed contractors, as well as those specializing in HVAC or electrical work that would be willing to donate services are also welcomed. All volunteers on the construction site must be at least 18 years of age or older but group teams are also welcomed. For more information about the project and current volunteer opportunities, contact Livingston County Habitat for Humanity or email Skomial at development@livingstonhabitat.org.