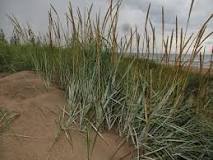 
A new virtual bingo game aims to help educate Livingston County residents and others across Michigan about invasive species while still being mindful of social distancing guidelines.

The Michigan United Conservation Club’s On the Water program has launched its Virtual Mi Invasive Species Bingo Game. With the weather warming up, the game encourages people to get out in nature while practicing social distancing. On The Water Coordinator Emma Nehan says the goal is to get people outdoors and educated while following guidelines set forth in the Governor’s Stay Home, Stay Safe order. Nehan says the big take away from the bingo game is to make individuals and residents in Michigan aware of various invasive species that could possibly be in their backyard but they might not be aware of. She says most of the invasive species on the bingo card like baby’s breath and blue lyme grass (pictured) are among the top 12 “most wanted” invasive species in Michigan so they’re very common and species she feels the public could get more education out of by knowing what they look like and how to identify them. Nehan says a lot of their events are volunteer-based such as tree plantings, invasive species pulls or trash clean-ups. Since they can’t do any of those during the public health crisis, she tells WHMI they’ve been getting real creative lately when it comes to things like this bingo game.

Those interested first download or print off a bingo card from Michigan United Conservation Club’s website and find instructions on how to play. There are additional links provided to better help people identify Michigan invasive species. Whenever someone spots an invasive species while out in nature, they take a picture with a time stamp and then mark it off the bingo card. Once three in a row are found, the bingo card and pictures get submitted. If the card is deemed a winner, then that person will receive an On The Water swag bag to be mailed to their home once the competition is done.

Nehan says they’re trying to get as many Michigan residents involved as possible considering the unprecedented times. She says the game is something a person, a household or a quarantine group can do by actually getting out in nature and learning a little bit about these invasive species that are really common but not a lot of people know about. The Michigan Invasive Species Bingo Game runs through May 7th. A link with more information provided.