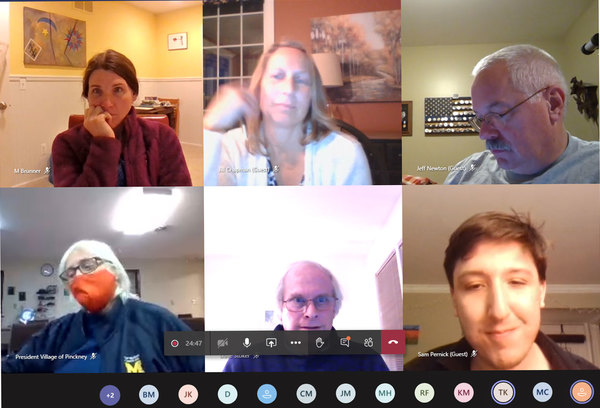 
One of the organizers behind a marijuana ballot proposal pitched the concept to the Pinckney Village Council Monday night.

Council met virtually for three hours, most of which was spent discussing the ballot proposal that only voters in the Village will decide this November. It would allow for marijuana facilities and is put forth by Jobs For Pinckney, which is as a grassroots group headed up by Sam Pernick of Oakland County. He presented to Council and detailed the ordinance that it would be required to adopt if voters approve the proposal, which allows for up to ten businesses. It would also require the clerk to develop systems for licensing and regulating those businesses within 30 days of the initial application window.

Some Council members have repeatedly stated they’re not necessarily opposed to the prospect of marijuana-related establishments but rather the process that played out and a court battle that ordered the question on the ballot. Council members have expressed opposition to forcing an ordinance on a small village – noting it’s already legal and Pinckney is not trying to stop marijuana. It was stated the ordinance doesn’t fit the Village, which lacks the administrative infrastructure to administer the process. In addition, according to a Q&A document on the Village's website, Village attorneys have indicated that the regulatory provisions in the ordinance exceed the scope of a ballot initiative of the 2018 Michigan Regulation and Taxation of Marihuana Act, which is limited to the number of establishments allowed.

Pernick said he thinks it would create hundreds of jobs, improved Village services and create a new revenue stream during a tough time for municipalities. Pernick told Council that 63% of Village voters supported the 2018 ballot proposal to legalize marijuana – he noted that was the highest percentage of any municipality in Livingston County and the entire state.

After questioning by council members, Pernick clarified that revenues for municipalities are from an excise tax and are not based on the number of sales and noted the economic impact long term, job creation and other benefits. He stressed the importance of education on the issue as well as people having access to safe marijuana that is tested, versus to what happens in the black market. Pernick said he feels there will be significant revenue long-term and noted the Village can also charge a licensing fee that adds up. Pernick said a single dispensary can employ 10 to 20 people and there are incentives for employers to hire locally.

Pernick said he agreed the proposal isn’t perfect and some of the concerns are valid but his goal was to get something done and make something happen and the ballot is a first step. Pernick stated their view is that if a municipality opted out and hasn’t done anything, then they don’t want cannabis facilities and have stated where they stand so it’s upon citizens to bring it to the voters. Pernick said he understood how some council members could be upset the ordinance and proposal wasn’t brought to them prior but citizens have a right to bring about initiatives. Pernick commented that a lot of people are very frustrated with municipalities that opt out and decide to wait a few years and see how things play out. He noted there are around 1,700 in Michigan and nearly all of them have opted out. Pernick told Council state law requires the creation of a competitive process for distributing licenses.

The ordinance would require the Village to issue a license for consumption establishments, like a smoking lounge. Police Chief Jeff Newton raised questions related to enforcement, how to monitor consumption and determine the level of intoxication saying he doesn’t think they’ll be able to do that as effectively as they can with alcohol. Newton said he doesn’t have a strong opinion one way or the other about dispensaries but he does have concerns does with consumption facilities. Pernick agreed determining levels is a concern because science hasn’t caught up to policies but he also stated that various problems still exist due to no regulation and you can’t control what people do on their personal time.

Pernick said the group has been out knocking on doors and talking to people in the community, but also admitted that they have no way for voters to read the actual ordinance that is attached to the ballot proposal. He later emailed WHMI and said that residents can look up the ordinance on the Village website and that they have sent the language to those who have asked. He added, "Council sat on its hands for two years and opted out and now they're upset that they have been left out of a large part of the process. But what did they expect? That's what happens when you opt out in a community that voted 63% in favor of Proposal 1. It's been two years. People are not going to wait forever."

President Pro-Tem Rebecca Foster stated that many people really didn’t know what they were signing when the group was collecting signatures to get the proposal on the ballot – adding no copies were provided of the ordinance. She asserted that had they had all the facts, many people wouldn’t have signed it, further alleging that canvassers weren’t being upfront about what was in the ordinance. Foster said she was glad that Pernick was encouraging people to read the ordinance but said it was also puzzling why it hasn’t been available for people to read.

Afterwards, Foster told WHMI her impressions of the presentation, "What came across to me was that Mr Pernick has no connection to Pinckney at all, did not do any homework on his assumptions and this is his dream ordinance that he wants enacted somewhere, anywhere, in Livingston County." She also says that several sections of the ordinance proposed by Pernick are possibly not legal - especially the section on exemptions from the Freedom of Information Act.

Councilman Shawn Tibus commented the Village is close to other communities that offer those facilities, which he didn’t view as an obstacle.

Pernick provided Council with a research memo about the Village opting in, which is attached. A new question and answer sheet about the ballot proposal from the Village is also attached, and a link to that website with more information is provided.