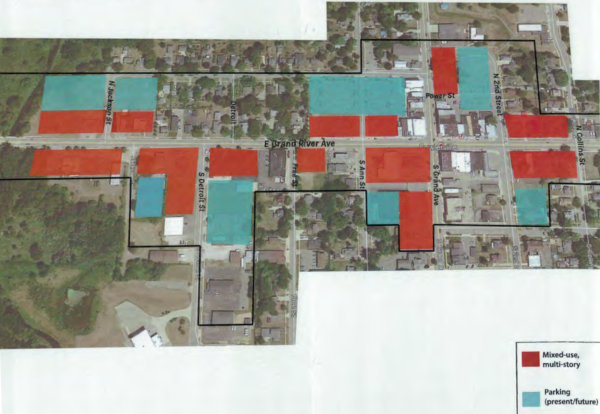 Officials with the Village of Fowlerville are discussing the possibility of creating a zoning district for the downtown area that could be beneficial as the region develops.

The Village’s Planning Commission met Tuesday and discussed the possibility of creating a Planned Unit Development or PUD district, which would work as a special type of floating overlay district. Staff had directed the municipality’s planners to come up with a concept of what a PUD district downtown would look like. The Planning Commission received a report from Planner Justin Sprague of CIB Planning, who brought a concept map depicting the downtown region, with areas shaded with the color red or blue. The red represents where future development or redevelopment is forecasted, while the blue areas represent space that could be used for parking or development.

Sprague notes that the districts currently encompassed within the PUD map are residential, business center and limited industrial research. He feels the entire PUD district should be rezoned to business center, and that the uses shown as by right or special land use would then become the overarching uses permitted in the district. Sprague says, "...where the PUD overlay will come in is say, that if there was a use that would be acceptable in this district...and they meet the development standards and the guidelines that we're looking for...then these additional uses would be acceptable under the PUD."

Some benefits of a PUD District are the potential for more efficient site design, preservation of amenities such as open space, lower costs for street construction and utility extension for the developer, and lower maintenance costs for the municipality. Sprague says the idea for a possible PUD district is driven by how Fowlerville’s downtown could grow over time. He feels it makes more sense to create a district that includes appropriate uses that meet the municipality’s design standards, instead of separating it by uses.

Having received a general consensus that commissioners want to move forward with the PUD district, Sprague will work toward drafting design standards that are compatible with the downtown. (DK)