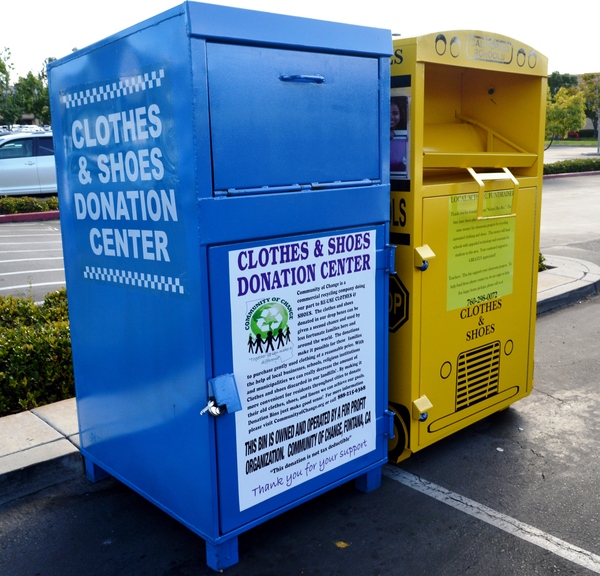 
The Village of Pinckney is working on regulating outdoor collection bins – which officials say serve a purpose but many times border on blight and aren’t always well maintained.

The Planning Commission met Monday night and discussed the topic, which staff and members have been working on for a few months. There was some talk about the best way to do so and a motion was approved to proceed with a zoning text amendment, so it would fall under code enforcement and be handled by the zoning administrator. There would be some type of permit process involved.

Currently, there are two sets of bins located on the Post Office property. Another is at a gas station but was said to be in violation of a different code. There could be others and officials will be doing a survey and inventory.

Many municipalities have been dealing with the problem.

Village President Rebecca Foster attended the meeting and told WHMI some of the collection bins are owned by non-profit organizations and others are not but they tend to come in and just drop off their bins in parking lots. She said then what happens is they don’t come back and collect them on a regular basis so the bins start to overflow – a problem that in part can be attributed to the pandemic and everyone cleaning out their houses. Foster said things start piling up around the bins and it looks really trashy – adding that some of it is literally trash.

Foster said they want to allow the bins because they do serve a purpose but make sure they’re regulated and that a property owner actually has a choice about whether to allow them or not. She noted the owners of the collection bins would have to fill out some sort of form so they know who actually owns them and who to call. Foster said they need to recognize that there will be rules and regulations associated with the bins and that they need to be picked up on a regular basis and any trash cleaned up.

By going the zoning amendment route, existing bins would become non-conforming. It was noted that owners would have the opportunity to come into compliance and would need to conform to all of the regulations and be maintained with no blight.

A public hearing will be scheduled for the Planning Commission’s February meeting.