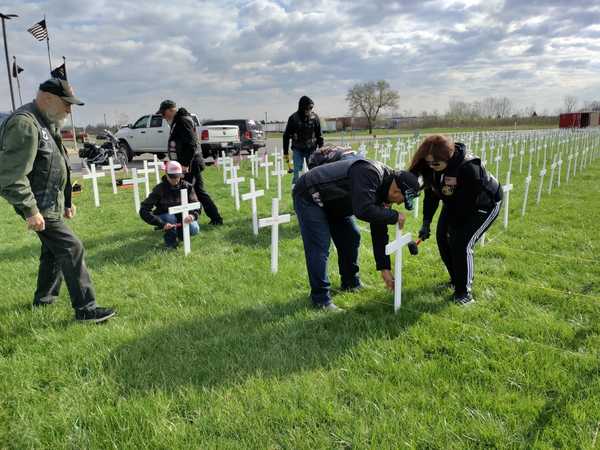 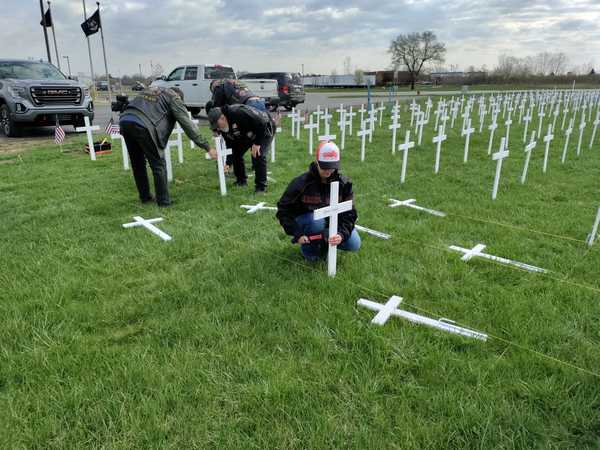 
660 crosses adorn the grounds of the American Legion Devereaux Post 141 in Howell as part of efforts to raise public awareness about the problem of suicide among veterans.

22 crosses have been placed each day for 28 days on the grounds of the American Legion at Grand River and Highland Road to represent the Veteran Affairs average of 22 veterans who take their lives every day. The final crosses were being placed today, for a total of 660. With an estimated 7% of the American population being veterans, the Legion took on the project to raise civilian awareness.

Veteran Service Officer Jon Luker says it all started after three Michigan combat veterans met and realized they had one thing in common - a buddy who had killed themselves after recently returning from service. He says they began to look into things to try and help prevent veteran suicide and raise public awareness. Luker says they came up with the idea to put up 22 crosses a day, every day for one month so that people driving by that same spot would see the field of crosses grow and get a visual impact of just how serious the problem is.

Luker commented that suicide happens a lot of times when people lose hope and there aren’t enough resources out there for veterans. He told WHMI sorting through excessive resources is a problem in some areas but then there’s a lack of resources elsewhere. He says the VA’s annual budget is enough to take care of about 25% of veterans who need healthcare due to situations they encountered during their service. Luker said that’s up to civilians to fix, not the military, and that's why they wanted to raise awareness.

He says civilians can make things happen by calling their representatives and make sure veterans they know are having trouble are directed to resources but also by having a clue that a problem is there and asking if somebody is feeling suicidal or doing things that some suicidal people will do like giving away all of the things that are important to them. Luker added that veterans always do better in the presence of and with the help and support of other veterans. He noted that getting a veteran help who is super depressed or seems to be slipping into something dark can be the tricky part.

The crosses will be on the lawn of the American Legion in Howell for another week. Luker says if people have somebody they want to remember who has taken their life, they are permitted to come out with a permanent marker and put the name on the front of one of the crosses. He added if they come out around 10am on any given day, then there will be people around to provide them with a little support while they do it.

Meanwhile, the Veterans Crisis Line and Suicide Prevention Hotline offer free, confidential support for veterans in crisis and their families and friends. Those in need can call 1-800-273-8255 and Press 1 or text 838255.