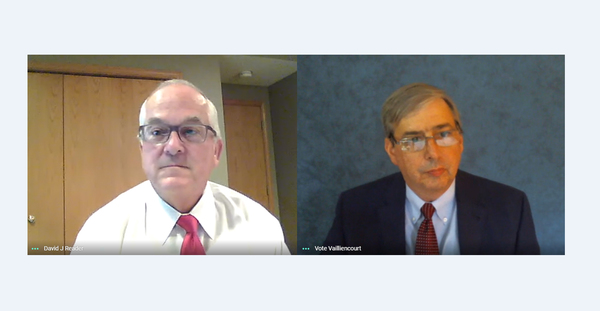 In his opening statement, Reader said as prosecutor, he will seek justice for all and not allow unethical conduct or put a thumb on the scales of justice. He promised justice against people in powerful positions who may have broken the law, and no special treatment for those in higher power. Vailliencourt said he brings independence and experience. By “independence” he explained that meant he works for “you”, and not the judges, the defense attorneys, or the “good ole boys” in the legal community. He said it means making decisions based on facts and evidence, not based on public clamor or the superficial appeal of a glib Facebook post.

When asked about the case of disgraced ex-Judge Theresa Brennan challenging the faith the residents have in the Livingston County judicial system, Reader, who was Chief Judge when the ordeal began, said it was his testimony in her divorce trial and Judicial Tenure Commission hearings that ultimately led to her conviction and removal from office. Vailliencourt said upon becoming aware of her improper affair with a witness on a high-profile case, that his office was the one to contact the JTC, the Attorney General’s office, and Michigan State Police, requesting that Brennan be investigated. Brennan was eventually removed from the bench by the Michigan Supreme Court and served a six-month jail sentence for perjury.

During the hearings it came out that several members of the Prosecutor’s Office had a personal relationship with Brennan. When asked if this was proper for members of a prosecutor’s office and judges to have relationships, Vailliencourt said that Livingston County was a small legal community, and that it’s common here and in counties across the state that lawyers have relationships with judges. He explained that many of these relationships form before one party is elected to the bench. Vailliencourt said that judges aren’t cloistered or expected to divorce themselves from the community, and that as long as relationships remain professional, appropriate and don’t impact the job, then it’s not a problem. He said you can’t simply have an individual go to the office and all they do is focus on their work with no life whatsoever.

Reader agreed that judges don’t live in a bubble, but he felt that Brennan’s affair with a chief witness went beyond incidental and that Vailliencourt’s office was aware. He said back during the Jerome Kowalski trial in 2013, it rose to level of no incidental or occasional conduct, but was extensive and pervasive. Reader said when he asked for a statement from Vailliencourt and Assistant Prosecutor Pam Maas on whether they knew any of the facts, they did not reveal that they did, though Reader says “yet we know that they knew.”

The candidates were asked what they thought the Prosecutor’s Office role should be in the addressing the opioid epidemic. Reader stressed the importance of education, whether it comes from the prosecutor’s office, court administration, or the probation office. He pointed to Project Opiate and police agencies that are involved, saying we have an obligation to assist those in the community who are suffering from it. Vailliencourt pointed to his work with Wake Up Livingston and the Livingston County Alliance. A big proponent of the specialty Drug Court, he said we have to make sure we identify who qualifies for it and get them help, which will help keep them from coming back into the criminal justice system.

Candidates were asked if they would support a countywide mandate for police officers to wear body cams. Vailliencourt said it should be up to individual departments, as there are costs associated that some can’t afford. He said that working with the departments that do have them, though, has shown that they are a useful tool for getting an objective record of an incident. Reader said he supports the use of body cams across the county. He was on the County Board when they converted to a central dispatch, and thought they might be able to do something similar for cameras- perhaps through the use of civil forfeiture funds.

When asked if systemic racism was an issue nationally or locally, both agreed that it was. Reader said he was concerned about the stereotype of Livingston County being racist and feels the county is unfairly branded as such. He said he is supportive of the Black Lives Matter movement and legitimate protests. Vailliencourt said that they have witnesses from the black community that have come here to testify but have been afraid to do so. He said they try to explain it’s a safe place, but there is an implicit bias and that it is a continuing effort to fight it.

Reader and Vailliencourt were asked to describe their experiences that make them the best candidate. Vailliencourt said his is unique in that he spent 13 years as a volunteer police officer, which has greatly informed how he understands the criminal justice system. He said he’s seen how it works on the street how police are forced to make split second decisions that are later questioned in the courtroom. He’s also spent 27 years as a prosecutor and said that experience can’t be duplicated. He said is the only here who has the real life everyday experience of actually prosecuting a case. Vailliencourt challenged Reader’s experience saying that experience is not something you get by watching someone present a finished product in court. He said, “It’s not for beginners and it’s not a retirement job.” He continued, saying experience means working with police as they investigate a case, consult with victims, assess strengths and weaknesses of a case, and identify the issues. Vailliencourt said experience is deciding how to best achieve justice in the individual case for the victim and the community.

Reader pointed to his efforts in helping grow the specialty court system in the county. He said when he started, there was an adult Drug Court. During his time as Chief Judge, he says they added Veterans’ Court, Mental Health Court, Family Dependency Court, Multisystemic Therapy Court, and Juvenile Drug Court. Reader says he also brings experience is managing one the county’s largest budget in the courts, and handled the most difficult cases that came through, including the freeway shooter and fungal meningitis cases. He said wants to restore trust in the judicial system because of everything that’s occurred. He said Vailliencourt’s office put their “finger on the scale” and used their connections with Theresa Brennan inappropriately, and that has destroyed the community’s trust. Reader said the only reason he left being a circuit court judge was to run for this position.

Vailliencourt closed by saying that as Chief Judge, David Reader, was responsible for assigning the Kowalski murder case to Theresa Brennan. He said Reader could have taken the case away from Brennan, "at any time, for any reason or for no reason, but he never saw fit to do so. He gave a double-murder case to a judge who had never presided over a felony." He said an effective prosecutor needs to be both independent and experienced and he had both of those qualities.

Voters will decide in the August 4th primary which candidate will earn the nomination. The winner of the primary will go up against Democrat Ragan Lake in the November general election.

The forum in its entirety can be viewed through the link below. It is also posted on the WHMI News Facebook page.