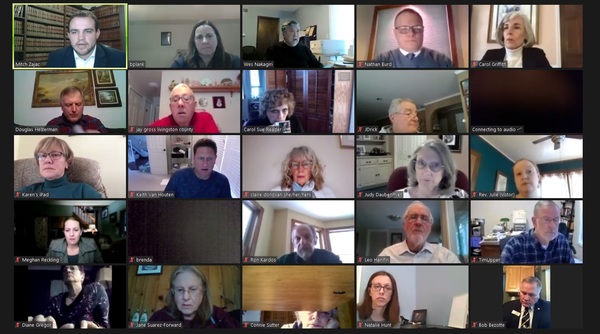 
Mixed support was shown largely along party lines for a new resolution introduced at the county level requesting the state change how they determine vaccine allocations.

The Board of Commissioners’ General Government and Health and Human Services Committee held a special meeting, Thursday. There they passed a resolution calling upon Governor Gretchen Whitmer and the Michigan Department of Health & Human Services to retract the newly-implemented Social Vulnerability Index allocation plan and replace it with a more "Scientific Medical Factor Based Plan" for vaccine distribution. In that, senior populations would be weighted more heavily than they are in the SVI. The SVI weighs 15 social-economic factors and is being used to rank Michigan’s 83 counties on how at-risk their populations are. Senior population is 6.25% of the equation. Livingston County rates as the least at-risk, overall, despite having the 11th highest number of seniors.

Guidance from the MDHHS states that the vaccine status in Michigan communities "correlates with the communities hardest hit by COVID-19 this spring (of 2020) and areas with high rates of risk factors for severe COVID-19 outcomes."

Several members of the public including those affiliated with both the Republican and Democratic parties spoke during public comment.

Those against the resolution largely spoke to Livingston County residents being patient and willing to wait their turn in line so that more adversely affected, racially diverse and at-risk areas can be taken care of first.

Chair of the Livingston County Democratic Party, Judy Daubenmier accused the committee and board of downplaying the virus until now and said she was dismayed that they are now showing interest in a way that divides people. She recommended people interested in the vaccine check other avenues like pharmacies.

Diane Davidson of Deerfield said she supports the state’s decision as studies show that minority races are dying at higher rates. Anne Santa Maria of Brighton concurred and said that while it stinks to be last on the list, the county’s argument ignores that social issues and medical issues are intrinsically linked.

Those in favor of the resolution point to the vulnerability of the senior population and how that is being under-represented in the SVI algorithm, for this crisis.

Republican State Senator Lana Theis said she has heard from hundreds of concerned residents and that while she understands the comments against the resolution, she said it is important that the governor understands that Livingston County is as important as any other county.

Fellow Republican, State Representative Bob Bezotte, pointed out that last year Livingston County was put in the same MI Safe Start district as the three most at-risk counties (Wayne, Oakland, and Macomb). When the county protested this, Whitmer said that that is where the county belongs. Later in the meeting, Board Chair Wes Nakagiri expanded on this, saying it was puzzling that now she is saying the county is of a greatly lower risk and is not deserving of the same supply of vaccine.

During discussion, Nakagiri said that in the SVI, minorities and non-English speaking residents get four times the weighting and priority of a senior citizen, despite near year-long cautions that seniors, especially those with underlying conditions, are the most vulnerable.

Federal health officials say the SVI strategy is being used as statistics bear out that minority populations have had higher rates of infections and deaths from COVID-19, and that their employment and housing circumstances tend to put them in situations in which the virus is more easily transmitted. For that reason, they say that distribution plans that focus solely on age do not target those who are most at risk. The strategy has also been endorsed by the National Academies of Sciences, Engineering, and Medicine, which concluded, "Mitigating these inequities by explicitly addressing the higher burden of COVID-19 experienced by these populations is a moral imperative of any equitable vaccine allocation framework."

Commissioner Brenda Plank said she appreciated all the comments and she, in her decision, is thinking about how her role as commissioner is to represent the residents of Livingston County, including those over 65. She questioned how, if they don’t pass this, that she could look senior citizens in the eye and say, “Sorry, you live in Livingston County and science says you’re not eligible.” She and Nakagiri both questioned why the SVI, available since 2000, was not used before.

Commissioner Doug Helzerman suggested that if we all knew the truth then we’d all be on the same side, but he doesn’t think we know the whole truth. He said the state and the CDC have not taken a straight line in regards to this and if SVI was so important, "why was it not the first card dealt?" Helzerman said he agrees the black community and certain other populations have been hit disproportionately hard and that he has no problem putting that in the mix, but the SVI does a poor job of this.

The Committee approved the resolution 3-0. It will now go before the full Board of Commissioners for consideration at their next meeting, Monday.