Overnight Closures On US-23 Near Fenton For Sign Replacement 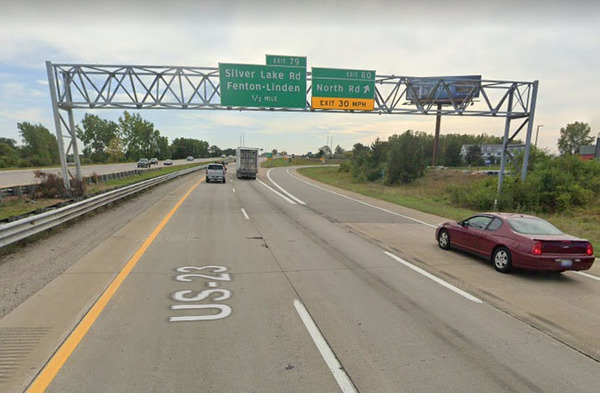 
Intermittent overnight closures are continuing along a stretch of US-23 near Fenton for the rest of the week.

Several weeks ago, the Michigan Department of Transportation started a sign upgrade project along roughly 1.5 miles along US-23 in Genesee County. MDOT is investing $1.3 (m) million to upgrade signs along the freeway, including the really large truss signs with metal frames that hang over one to two lanes of traffic. Some more significant replacements now have to take place, which is what crews are focusing on. Work got underway Monday and is expected to continue through Friday, although everything is weather dependent. Single lane closures begin around 9pm each night and end by 6am. However, 15-minute full closures are being implemented between midnight and 4am that allow crews to stop enough traffic to move heavier pieces of equipment and signs.

In addition to the signs, the foundations and trusses that hold the signs are being replaced, which MDOT Spokeswoman Jocelyn Hall says are pretty heavy duty jobs to do with live traffic. She says for the safety of crews and the motoring public, crews are doing as much as possible during overnight hours when traffic counts are significantly lower. Hall noted that work zone injuries are on an uptick and they seem to come in waves but lately there have been a number of very unfortunate injuries and fatalities involving different work zone workers. She added that anyone working on a night crew and doing overnight work is often in a more dangerous situation because it is dark and the potential for impaired drivers being out on the roads is much more significant.

Hall says motorists should be aware that if headed in either direction on US-23 north of the North Road exit in the work zone area that there is the potential to be held up over the next couple nights, which she says is unfortunate because most people who commute during overnight hours are not expecting a full closure. Hall says it definitely has the potential to catch some people by surprise but there will be advanced signage warning that they are approaching a work zone. She added the closures do create some back-ups and it also takes a little time for those back-ups to flush out once the roadway is re-opened. Hall suggested that if anyone is in a pinch to get somewhere quickly, they might want to seek an alternate route altogether. She said there is plenty of adequate signage out to warn drivers of the overnight closures, which are being done with assistance from Michigan State Police.