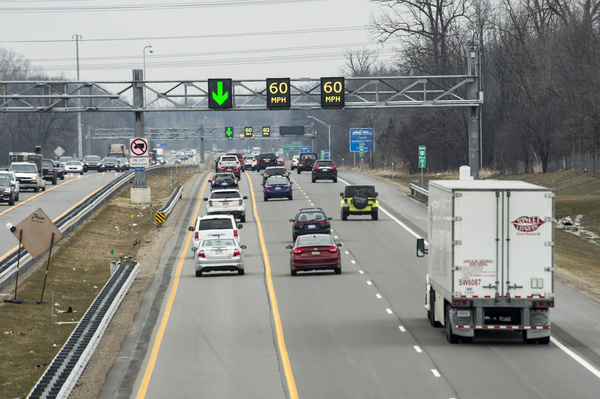 M-DOT’s US-23 Flex Route project is competing in a national competition in which the public has a vote.

The Michigan Department of Transportation's US-23 Flex Route project is among 12 finalists from across the nation for the 2018 America’s Transportation Awards competition organized by the American Association of State Highway and Transportation Officials (AASHTO). The project was is a national finalist after winning at the regional level in the Operations Excellence, Medium category, and is credited with greatly alleviating traffic congestion in Washtenaw and Livingston Counties. The US-23 Flex Route is the first of its kind in Michigan and operates along a 9-mile corridor from M-36 to M-14, just north of Ann Arbor. The system notifies drivers when the shoulder lane can be used for travel. It also offers motorists suggested speed limits during congested traffic periods and indicates when to merge.

M-DOT University Region Planner Kari Martin says AASHTO is the setting body that publishes specs and guidelines used for highway design and construction throughout the United States so it was very exciting to win the operations excellence award category, as they were up against peers within the Midwest. Martin tells WHMI they’re very proud of the project, which has really improved operations along the corridor. She says it has improved system reliability and planning time by about 50% for southbound traffic in the morning and about 20% for northbound traffic in the evening. Martin says it makes it more predictable in how people can use the corridor. She says people know when to leave home or work and know what time they can get home so it’s much more reliable.

As for the competition, the national grand prize will be determined by an independent panel of transportation industry experts. Finalists are competing for the national Grand Prize and the Socrata People's Choice Award, both of which come with a $10,000 check for a charity or transportation-related scholarship of the winners' choosing. The people’s choice award will be selected through online voting by the general public, which is underway now though 11:59pm on Saturday, September 22nd. Individuals can vote once a day through the provided link. Online votes will be weighted to each state's population, allowing for greater competition between states with larger and smaller populations. The winners will be announced at the AASHTO Annual Meeting in Atlanta on Sunday, September 23rd.

Martin noted the Flex Route project has won several awards throughout the consultant industry as well as some other national awards so it’s been highly recognized throughout the country. She added they’ve also had a lot of peer-to-peer exchanges with other states looking to do similar types of activities along their corridors using this type of technology. The current competition is considered the big transportation project level award for the nation so Martin says it would be a big win and public voting would greatly improve their chances for the people’s choice award. (JM)