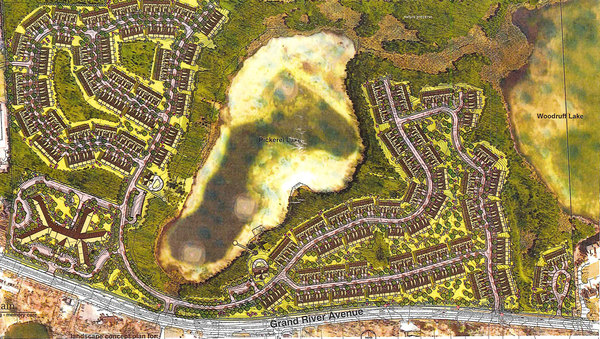 
A conditional zoning agreement for a new multi-unit rental and senior citizen development in Brighton Township has been updated.

In January of 2018, the township entered into a conditional zoning agreement or CZA with Manchester Brighton for the Encore Village development. At a recent virtual meeting, the board discussed the CZA for the project that’s proposed on 147 acres near Pickerel and Woodruff Lake. It consists of approximately 380 multi-family residential units and a 162 bed assisted living facility. Both parties proposed updates to different sections and language deemed agreeable to all parties was worked out with the township attorney and incorporated into the latest proposed version.

Township Manager Brian Vick told the board the original CZA had envisioned the senior living facility would be owned or operate under one development and then the residential part would be a separate development team. Vick said developers approached the township around March about amending the CZA to identify the different developers and clean up the language. Vick stated it was an opportunity for the township to have more clear facts about who the developers are for the different components, the timeline, the plan approval and updated language.

Vick stated one section that was probably the most significant sticking point was related to when debt service would start being charged on the quarterly bill for the 47 REU’s that were purchased for the first phase, which is the senior living portion of the project. Vick noted later this year they’ll be required to purchase 222 REU’s and when that happens, the developers will be required to also start paying debt service on those. Vick stated it was really part housekeeping and an opportunity to clean up language, noting he and township planners have reviewed multiple versions of the agreement.

The board ultimately approved the amended and restated conditional zoning agreement between Manchester Brighton LLC, RREV Holdings LLC and the township. Member Mike Slaton was opposed.