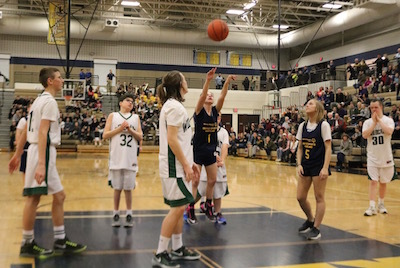 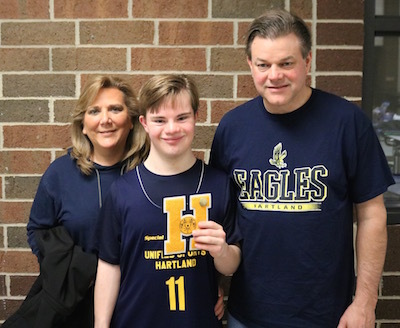 "My buddy and co-captain, Jake Gallaher, on the hockey team, he’s in a peer-to peer-class that we have (at Hartland High School)," Albring said. "He said we were doing a basketball league with the peer-to-peer kids and they needed extra players and I thought it would be a blast to do and have a great time."

The league is in its first year, and Hartland’s coach, assistant principal Jason Reck, says it’s been an unqualified success.

"I think the best thing about it is all the kids involved have a feeling of success at the end of the day," he said. "They have a feeling that they’re part of something, something bigger than their classroom they go to every day.

"They get to experience what it’s like to be a varsity athlete, and coming from an athletic perspective, it's an incredible gift to be able to give these kids, the opportunity to feel what it’s like to play in front of their friends and family and to have some success."

Each Hartland player received an athletic letter after the game, including Jamie, who hit a few shots and played aggressive defense despite being the smallest player on the floor.